So today’s the big day! Amurica gets to choose wether or not they want to devolve into fascism and insanity at the hands of a giant orange groundhog or keep treading along (sinking perhaps?) in corporate control. The irony isn’t lost on me, or I hope most folks, that Remembrance Day is also celebrated, or observed if you will, at the end of the week. So many have sacrificed so much so a country like the U.S. can decide if they want a Dark Lord of Sith proportions in Trump running the show. Even if he doesn’t win I think that there’s been irreparable damage done to the States. He’s given a voice to all the bigoted, racist, small-minded cretins who now feel it’s OK to say and do vile things publicly. Who knows what that might lead to? It’s quite crazy if you really think about it. The landscape of the world might be very different come tomorrow. But I do believe that it will be a landslide in Clinton’s favour and, while I’m all stoked to see a woman elected as President, she is so deep in bed with the banks and big business that nothing will change. It’ll probably just get worse. The gap between the haves and the have-nots will continue to widen and liberties will continue to erode but maybe, just maybe, people might finally reach a tipping point and there might be some sort of revolution lurking on the horizon. Probably not as there seems to be way too many distractions in the form of intranets, TV, movies (sorry!), sports, celebrity nonsense and a myriad of other things that folks seem to find more important. Dare to dream.

And I do have to admit that there’s a small part of me – a dark festering black hole of cynicism lurking in the back of my reptile brain – that is interested in seeing how things would be if Trump were to actually win. It’s the same part of me that clicks on a headline that promises “Watch this man swims with sharks! You won’t believe what happens next!” or “Train derails and crashes into circus tent! Thousands killed! Animals go on rampage!” I’m a sad sad man.

It should make for an interesting night. I, for one, will be watching this shit-show. Might need something uplifting to throw into the DVD player afterwards though. Maybe some Black Mirror or Starship Troopers or Triumph of the Will.  Good luck to us all. 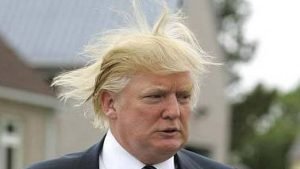