there will be spoilers…and maybe a little cussing..

Sat down after a busy day at work (not a sentence I write often but thanks weather!) with a couple of beers, the wife and Patrick Swayze. No, I didn’t resurrect his corpse (we did that 2 years go and it was kind of gross), we tucked into the classic Roadhouse. What a treat!

I sort of remember watching this decades (!) ago but it’s way more fun now because the times they have a changed. Look at all that big hair! Look at all the ill-fitting clothes – the sweater vests, the white blazers, the pleated pants! Look at all the 80’s boobs! They seemed to want to show naked boobs any chance they could back in those days. There’s even a monster truck! This movie has everything. The Swayze plays a one-named guy, Dalton, who’s a legendary bouncer – 2nd best after Sam Elliot, playing a grizzled veteran of the bar bouncing scene. Has Sam Elliot ever played anything but a grizzled something or other? I’m not too sure what makes Elliot’s Wade Garrett character such a good bouncer as he just gets the shit kicked out of him in every fight scene he’s in. And he’s not sexist at all, saying 80’s things like, “That gal’s got entirely too many brains to have an ass like that.” Yeesh. 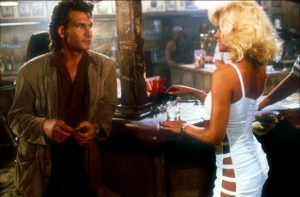 I never thought I’d say this but let’s bring back the 80’s!

Swayze is also a smart, zen-like fella who has a PHD (or just a regular old degree, I can’t remember) in philosophy. When asked by “Doc” his doctor love interest (get it, Doc?), played by Kelly Lynch, if there was any area of philosophy that he specialized in, Dalton answers, “No, not really. Man’s search for faith. That kind of shit”. This film is filled with awesome lines like that. “Pain doesn’t hurt”, being another gem. They also have a great love scene where he picks her up and slams her against the stone wall in his apartment. It looks quite painful and awkward and way too much work. What’s wrong with the bed? It’s right there behind you!

The plot is pretty simple, Dalton is recruited by a guy to come to his run-down shit-stained bar in nowheresville USA to help clean it up. There he runs afoul of local bad guy played, for some reason, by Ben Gazzara. His name is Brad. He’s surrounded by a bunch of lousy henchmen who he berates and beats on a regular basis. And he really hates it if they bleed. “You bleed too much. You’re a messy bleeder”. I dunno, if my boss punched me in the face, stomach and groin in front of my co-workers, who all laugh at this, I might be inclined to seek employment elsewhere. There’s a lot of cock-punching in this movie as well. When Sam Elliot arrives on the scene the first thing he does is punch a guy in the cock. 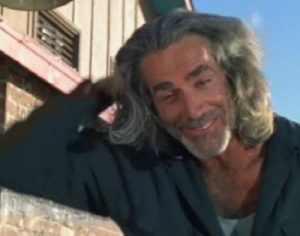 Garrett is also somewhat of a lech. The three of them end up in a diner in the morning after an all-night bender. There’s some lame song playing on the jukebox so Garrett asks Doc to dance only to heavily mac on her as Dalton looks on smiling. It makes for a really weird, uncomfortable scene. Why is Dalotn even friends with this sleazebag? Doc then announces she’s off to work in a few hours. I’m thinking, she’s a doctor, she’s been up all night with these guys partying and now she’s going to work? Hope I don’t have an appointment with her that day.

Anyways, you can probably guess the rest – Dalton and Sam Elliot confront the bad the guys, Dalton has a big fight with Brad’s number one henchman who tells Dalton, ‘I fucked guys like you in prison!” Ok. What do you say to that? Then Dalton rips out his throat. I think I was actually clapping at this amazing scene. 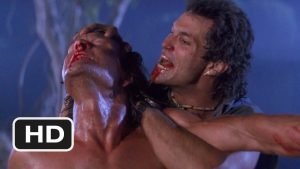 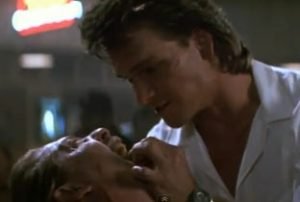 Did I also mention that Dalton’s a dentist?

So at the end the townsfolk rise up to help Dalton take out Brad – who’s been terrorizing the town for years – by shotgunning him to death in his living room. When the police arrive (the first time the cops have made an appearance in the entire violent, blood-soaked film) and ask what happened while gazing at Brad’s bullet-riddled carcass, everyone just says “I didn’t see nothing”. They all have a bit of chuckle and that’s that. The cops seem fine with this answer. Vigilante justice at work.

I had forgot that the movie also features Jeff Healey and his band. A lot of Jeff Healy and his band. He even has a few lines. I snuck backstage at a Jeff Healey concert many years ago and ate a ham sandwich with him. Seemed like a pretty cool guy. 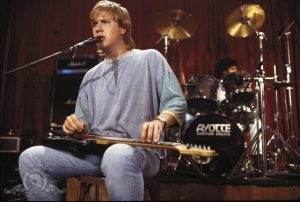 There’s plenty of odd out-of-place scenes which make this film so much fun to watch – Brad’s barbie doll girlfriend doing a striptease in the bar for no reason at all, a scene with a giant stuffed bear and a fat guy named Tinker – did he think the bear was alive and trying to kill him? I saved the best line from that scene, and maybe the movie, for you to discover, or re-discover, when you watch it. 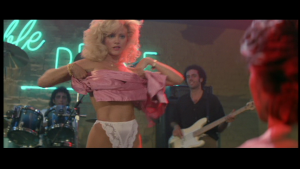 Roadhouse is not a good movie. It’s a great movie! It’s directed by a guy whose first name is Rowdy. Do I need to say anymore? I heard that they are going to do a remake. Sigh. You can’t improve on perfection.

But if you please, check out Roadhouse because it is nothing but non-stop good times and comes highly recommended. Invite some friends over, enjoy some beers and what-not and take in the Swayze in all his sweater-clad glory. 5/5