Would be an awesome photo if everyone was bald.

There will be spoilers…

They say that dreams are fleeting. As dreams race through your sleeping brain they can be quite vivid, intense and generally non-sensical. Once you wake they usually fade from memory quicker than a fart in a windstorm. This is how I feel about the Fast and the Furious series. Seven intense farts in seven non-sensical windstorms. I think I’ve seen most of them but to be honest I can’t really remember any of them. They all seem to have the same things: Vin Diesel (not his real name), Paul Walker (R.I.P.), some crazy fast cars driving around doing impossible things and beautiful women not wearing or doing much.

I take that back, this is a very important job!

I sat down to watch Furious 7 (I can’t believe that they’ve made seven of these things already) without remembering anything about number 6 (or 5 or 4 or any of them really. Maybe I haven’t actually seen any of them?) or who any of the characters were. Didn’t matter. What I saw or what I think I saw as my memory is a bit hazy, were cars flying through, not one, not two, but 3 buildings high up in the desert in the middle east. I saw The Rock drive an ambulance (which comes with a giant machine gun for some reason), off a bridge (not too sure how he got enough momentum as it was in the middle of the bridge) and onto a deadly drone, controlled by a nasty terrorist, that was flying around Los Angeles shooting at various fast cars driving furiously. Strange that there weren’t any cops or army guys out while this racket was happening. One question that popped into my fuzzy brain was how would a known terrorist get into the U.S. so easily with a giant attack helicopter that has a drone (which actually seemed much bigger than the helicopter itself) inside of it? 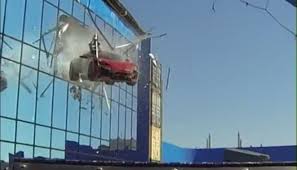 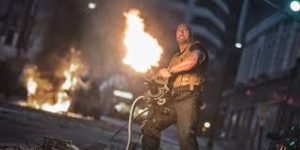 In the future this will be a standard issue accessory in all medical emergency vehicles.

I saw cars parachuting out of planes, cars driving down mountains, cars smashing into other cars at high rates of speed. Buckle up buttercup! I saw Jason Statham shooting up an entire hospital and, again, no cops around. I saw Vin Diesel trying his best not to sound like Groot but failing miserably. There’s a great scene near the end of the film where everyone thinks he’s dead and his girlfriend, Letty, screams at the folks trying to save him to stop giving him mouth to mouth so she can cradle his giant bald head in her arms and revive him with tales of how they met. The power of love.

The entire plot revolves around either Statham trying to kill the Furious gang or the Furious gang trying to kill Statham. Kurt Russell (yay!) pops up to help the them find Statham (and try and convince Groot to give up Corona for some Belgium beer) if they help him rescue an impossibly beautiful computer nerd (for some reason after they rescue her she goes swimming in her sexy bathing suit. Did she bring the swimwear with her when she was originally kidnapped?). Anyways,  Vin Groot agrees to this plan but he really didn’t need to as Statham keeps showing up everywhere the Furious gang is to try to kill them. All they had to do was wait for him. Whatever. 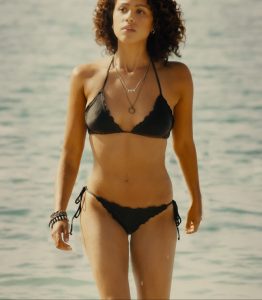 Nerd! Good thing I packed my trunks before being kidnapped!

Furious 7 is not what you call a good movie. It was fairly entertaining, if overly long, and eye-rolling at many parts. It’s even quite touching (if not a tad manipulative) at the end with a nice tribute to Paul Walker who died, ironically, in a car crash (not related to the movie) part way through the production. 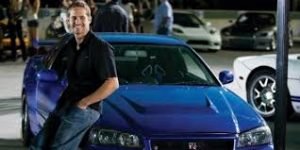 If you’re looking for fast cars, ridiculous action, car mayhem and lots of fighting, this is your ticket. There’s a point in the movie where Vin says something along the lines of “My crew are drivers, they’re not fighters” which is pretty funny since almost everyone of his crew gets in a fight (and wins!). You have Vin Groosel fighting Statham, the Rock fighting Statham, Tony Jaa fighting Paul Walker, Michelle Rodriquez fighting, not only Lady Roadhouse (Ronda Rousey), but a bunch of cool-looking female body guards and yourself fighting disbelief. Lots and lots of fighting. Oh, and you also have a hilarious scene with the Rock flexing his muscles to explode the cast off of his, apparently, healed arm so he can fight. Pretty good times. Or was it all a dream? 6/10 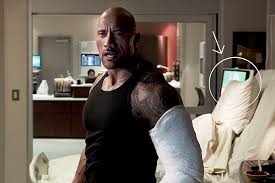 My dreams always have the Rock in them flexing out of a cast for some reason.

Tell it like it is, QT!Say it’s ain’t so, Steve!
Scroll to top