So there’s been some rumblings about a Godzilla vs King Kong movie. Sigh. Well I should say another Godzilla vs King Kong movie. I was a huge Godzilla fan growing up and even I didn’t like the 1962 battle epic. The problem, which even as a 9 year-old, I always saw was that King Kong was much much smaller than Godzilla. I don’t remember any rationale or explanation for the size discrepancy in that version but apparently the controversy (if one can call it that) was not lost on the studio execs who brain-farted this thing into existence…

“A threshold problem is that Kong supposedly is much smaller than Godzilla. That fact was not lost on Universal. “There were funny comments about him having to be the size of the Empire State Building instead of hanging off of it,” says a studio insider. But a source close to Tull says Legendary is confident it can come up with a rationale to explain how Kong and Godzilla can do battle — and possibly become allies.” 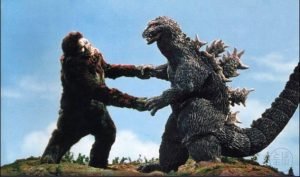 May I have this dance?