(there will be spoilers and maybe a bit of cussing) 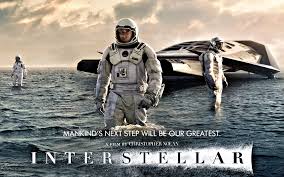 I finally got a chance to check out Interstellar the other night having missed it in the theatres where it really should have been viewed. I’m sure you know the plot by now – the Earth is all dusty and out of okra so secret NASA sends out probes to find inhabitable planets which we can colonize. Then Matthew McConaughey is asked to go and find the people who went before him. Exciting adventure ensues! I didn’t really know what to expect other than big production values, lots of nice space movie scenes and Matthew McConaughey’s smug, large head. 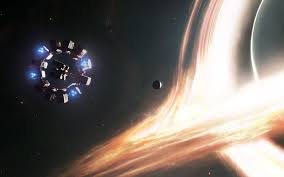 What I didn’t expect were a couple of things: the emotional content that always seems to be lacking in Christopher Nolan’s films. Maybe it’s because I have a child or maybe I was just tired (I’ll cry at just about anything when I’m tired) but I was really invested in the characters and their predicament. I kept placing myself in Cooper’s (MM’s character) space boots and how I would deal with me staying the same age as my kid grew up and got old before I did. It was quite touching and well done.

Another thing I didn’t expect, although in hindsight I should have, were the glaring plot holes that abound in Interstellar. Something that is not lacking in Nolan’s films. Spoilers coming up!

I didn’t really get the hows and the whys and the wheres and hows of the plan to save the world. None of that made any sense to me. Was it aliens who saved them or was it future Cooper sending messages in the black hole bookshelf back to himself? Who built that bookshelf? It was a very nice bookshelf. But why a bookshelf? Why not a refrigerator or a swimming pool?  And the message he relayed to himself and to his daughter was on a broken wristwatch. Was that the best they could come up with? Wouldn’t it take forever to relay the complex black hole gravity physics stuff into a goddamn wristwatch? And then take forever to decipher it? And one of the messages he sent to his daughter was the word “Stay”. Who was that meant for? Him? Was he supposed to stay? If he did he wouldn’t have gone, saved the world and sent the “Stay” message. Is that a paradox? I think it may be a paradox. 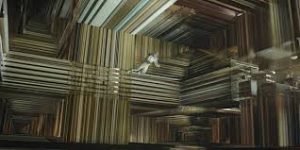 Now where’s my copy of “On the Road?”

And what was with Matt Damon? I didn’t even know he was in this film. He wakes up all sad but happy to see some folks for a change and then tries to kill them and take their ship to earth? Why? He didn’t have to head bonk Cooper and then use little jet packs to escape. All he had to do was go with them or even borrow one of the 3 ships they had. I’m sure they would have thought Matt Damon an asshole for bringing them there to rescue him but surely they would have helped mad Matt Damon out. It was like that entire section was from a different movie.

Hey Matt Damon is in this movie!

We’re to believe that the entire movie was about Cooper trying to get home to reunite with his angry daughter only to have them finally get together – she’s like 95 or something at this point and after she travelled 2 years in a watery space sleeping tube to see him – and then her tell him to go and seek out Anne Hathaway, who’s on another planet somewhere (how did she even know this?), after only a 2 minute visit? Hello, nice to see you, catch you later! Wouldn’t Hathaway be like over 100 years old by the time Cooper gets to her planet? What if the guy she was in love with was still alive? That might be a little awkward when Cooper shows up to live with them for the rest of their lives. “Sooo, where do I sleep?”

Cooper is floating inside a black hole in his nifty space suit. Wouldn’t that like crush him into dust and then crush the dust into even smaller dust? Black holes can bend light and destroy stars for hell’s sake. And after he’s finished sending his message from inside the black hole to his daughter’s wristwatch (yes I just wrote that), he gets spit out and into orbit around Saturn where he gets rescued by a passing ship just as his air is about to run out. Sure. I guess that’s not really a plot hole but a weakness. There were lots of weaknesses. Weaknie? 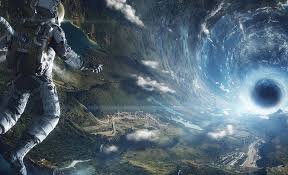 Not too sure if I should go in there or not.

I could go on about things like the other space guy, Romilly, who’s waited for 23 years for Cooper and Hathaway to return to his ship – why is he not bug-nuts insane? He’s been tooling around the ship waiting and waiting for those kids to return. For 23 years. Why didn’t he climb into one of the watery sleep chambers? I’d be crazy as a shit-house rat. Whatever that means. And Michael Caine’s character and how he lied to everyone about the plan? Christ, I should stop there.

I’ve been sitting here for 23 years for you kids to get home! Oh and I ate all the food.

I make it sound like I hated the move but I actually quite liked it. It looked beautiful, had cool sassy robots and spaceships, huge tidal waves, a black hole and Topher Grace for some reason. And I really should expect some weak plotting and holes from Nolan – hello Dark Knight Rises! It was great looking and sounded amazing on the Blu Ray and I would whole heartedly recommend it for the emotional qualities and just the shear ambition. It’s no 2001 but it is worth your time. 4/5

Ok, Here We Go.Black Dog Video Newsletter September 15th to 21st “The Future is the Past...
Scroll to top