Blog
You are here: Home1 / Blog2 / Black Dog Blog3 / In the Category of “Of course it will be terrible…” 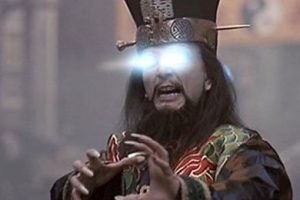 I don’t know how many times I’ve said that Hollywood is pretty much creatively bankrupt. Most of the drivel that comes out these days is in the form of sequels, superheroes or remakes. It gets quite tiresome and very annoying. Most of the time I just role my eyes and move on but every now and then an announcement is made that really cheeses my goat. There are some films that just shouldn’t be even considered for a remake or updating or reboot or whatever the fuck they want to call it. John Carpenter’s cult classic  Big Trouble in Little China definitely falls into that category. I loved this move so hard when it first arrived back in 1986. It had so much going for it – monsters, mysticism, mayhem – all underscored with a playful sense of humour. It was a perfect film for my sensibilities at the time. Sigh. Even Kurt Russell is skeptical. Hollywood: Please Stop This Madness!