A few months ago I wrote about this ongoing issue video stores in Canada were having with the evil Disney corporation. Many of you signed the in-store petitions that we had there – thanks very much!. There is also a website to go to voice your displeasure with Disney. In case you have no idea what I’m talking about, here’s a little refresher… The Walt Disney Company is trying to limit indie stores from renting movies for the first 28 days of release. This 28 day holdback would keep millions of Canadians that have supported Disney by renting their movies for decades from being able to rent their movies at their local video store and likely any movies in the future because, if we can’t convince them to change their policy, other studios might do the same and soon enough video stores would be eliminated from Canada. Basically Disney wants you to buy their product (and Disney stuff is not cheap) as opposed to renting it. I think that sucks. (We are still going to be renting them to you, Shhhh)
If you value your local independent video store, please sign our petition at http://www.boycottdisney.ca/ and tell all your friends (and maybe some enemies as well) to do the same. Thanks! 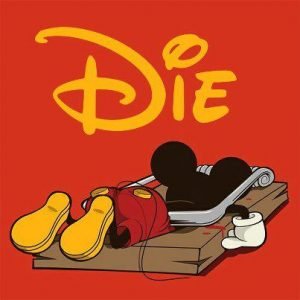 Cleanskin – Sean Bean (love saying that name – it’s more fun when you say Seen Been) stars as a British secret service fella who has to track down some terrorist asshole before he blows more shit up real good. Also on the blu Ray.
[youtube]http://www.youtube.com/watch?v=8dRZlLdO41E[/youtube] and here’s a good review of the film as well – http://www.dvdtalk.com/reviews/56974/cleanskin/

High School – Stoner comedy that finds a high school valedictorian getting high first time on the same day that a random drug test hits the school. With his college scholarship at stake, he enlists the school’s biggest stoner to help nullify the results of the screening – by getting the entire student body high. Whoa, great idea, dude. Do people still care if others smoke the weed? [youtube]http://www.youtube.com/watch?v=LS98A1Y7d8s[/youtube]

Lola Versus – The lovely and talented Greta Gerwig gets dumped by her no-good boyfriend 3 weeks before their wedding. Her friends try to help her cope. Hilarity and drama, I presume, ensues. One of those late 20-something romantic comedies that tries to tackle many big issues such as relationships, marriage, friendship, nice hair and the meaning of life. I was hoping it was going to be something like Lola Versus Godzilla or Lola Versus Zombies or Lola Versus Disney. Also on the Blu Ray. [youtube]http://www.youtube.com/watch?v=b5hYBMZft9w[/youtube]

The Loved Ones – Lola (what another Lola, how can that be?!) asks Brent to the prom. Brent turns her down. Lola then kidnaps and tortures Brent. Ahhh, young love. I haven’t had a chance to see this Australian piece of hilarious nasty yet but word on the street has it that it’s quite a fun excellent little number. Think if Carrie had sex with Misery and produced a crazy weird baby. I didn’t get a date to my prom (probably because I didn’t ask anyone) but I never thought of kidnapping and torture. Ahh, those wacky Australians. [youtube]http://www.youtube.com/watch?v=MPzVBOHjnTM[/youtube]

The Office Season 8 – This show is still on? I thought it was cancelled. I guess that the documentarians making this show finally have enough footage. Used to be quite a good show. Now? Not so much.

Snow White and the Huntsman – Pretty good, slickly made medieval fairytale romp although I was a tad drunk when I watched it and don’t remember a lot about it. What I do remember is K-Stew’s acting range wavering from staring straight ahead with her mouth closed to staring straight ahead with her mouth partially open. Yes she’s terrible. The dwarves were great – Bob Hoskins (makes me sad), Ian McShane, Nick Frost, Toby Jones and others made the film that much better. Worth a look but not recommended to watch drunk. Also on the Blu Ray. [youtube]http://www.youtube.com/watch?v=ebSZOlCnXq0[/youtube]

Spartacus: Vengeance – I guess there’s still more gladiator sex and violence to be had. Enjoy. [youtube]http://www.youtube.com/watch?v=ElnzlfKW5xc[/youtube]

Starship Troopers: Invasion – Animated update in the Starship Troopers universe finds the giant nasty bugs battling the space soldiers again. Plenty of gratuitous violence and computer generated nudity and sexiness to fill your eyeballs with. Loved me the first film. Hope this one is OK. Also on the Blu Ray. [youtube]http://www.youtube.com/watch?v=P3823VO9gG8[/youtube]

30 Rock Season 6 – Now this is a funny show! For example Jack: “Good God. Lemon, those jeans make you look like a Mexican sports reporter.”

We Have a Pope – Italian drama about a pope and his relationship with his therapist. I wonder what a pope talks about in therapy. If it’s the current pope, Joey Ratz as I like to call him, I imagine he talks about the days spent in the Nazi Youth? Or the ongoing sex scandals which seems to plague the Catholic Church? Sorry, too obvious? [youtube]http://www.youtube.com/watch?v=8VqNoLzZRkI[/youtube]

What to Expect When You’re Expecting – Ugh. A “comedy” about some couples having babies. Really hard to make this one sound interesting. I have a kid and I have no interest to watch this. Not even on the plane. Stars the increasingly weird looking Cameron Diaz. And for some reason we have it on the Blu Ray .[youtube]http://www.youtube.com/watch?v=JQTetUGvKWk[/youtube]

Where Do We Go Now? – A group of Lebanese women (yes I had to read that twice myself) try to ease religious tensions between Christians and Muslims in their village in this comedy drama from Lebanon. Don’t get this one mixed up with the pregnant movie. [youtube]http://www.youtube.com/watch?v=QBGuk2lfZdc[/youtube]

And speaking of K-Stew, here’s a funny bit from the fine folks at Bad Lip Reading. Enjoy…http://www.cinemablend.com/new/Watch-Twilight-Get-Bad-Lip-Reading-Treatment-32786.html

Well that’s about it for this edition, folks. Fall is coming. No more short skirts and flip-flops. Sigh….