Yes I’m back and all refreshed (sort of – ate way too much rich food and nice wines and cold beers this silly Thanksgiving weekend). Hope that you all survived without the newsletter for a couple of weeks. Or in other words, I bet no one even noticed it’s absence. Anyways I won’t bore you with details of my trip but here’s some stuff I did in Mexico;

Things I did in Mexico; ate lots of tacos, enchiladas, moles, sopas and everything in between. Drank my weight in margaritas, at least twice that in cervazas, walked about 1,147 KM, went on a paddle boat ride from hell (boats were insanely hard to peddle, especially in the hot sun and wearing jeans while a undersized life jacket choked me to near passing out. We had rented the blasted thing for an hour but were back at the dock after 25 grueling minutes. Of course Gus kept saying “go faster”), went on an awesome boat ride through a canyon where we saw some crocodiles, monkeys, birds, tourists and lots of floating garbage. Checked out a fairly depressing zoo – lets face it, most if not all zoos are fairly depressing, toured Frida Kallo’ house (beautiful!), urinated in Leon Trotsky’s house (what a depressing abode), suffered the worst toilet seat in the world in our hotel, went to the most amazing library, went to a weird “heavy metal” market, saw a man with a track suit that looked like a giant ruler, watched a odd parade that consisted of kids either playing drums or dressed up as creepy monsters/religious figures and old men that were either drunk or well on their way, raised my blood pressure with a few terrifying cab rides, discovered that traveling with a seven year old is not as much fun as it sounds, saw some awful, crushing poverty, listened in anger as insanely loud church bells rang at 6 am and then every 15 minutes after that for 2 hours on a saturday morning – what kind of god wants its peasants to get up at the crack of dawn? A cruel, humorless bell-loving god, that’s who! Watched both the New York and Miami versions of CSI (the Miami one is far worse)’ read the Led Zeppelin biography, and pondered my wife’s perplexing question. – if you drop your sunglasses in a Mexican restaurant’s toilet, can you ever wear them again? 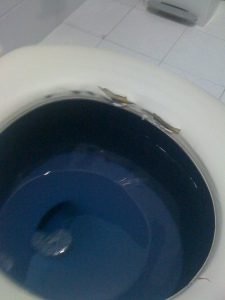 See those sharp bits of vinyl? Underneath those lay the real horror – wet, gross absorbent sponge. Think of how gross that is. Think of it! 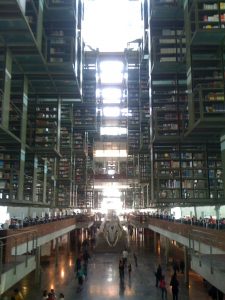 Library from the film Brazil. 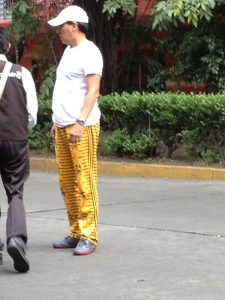 And yes it came with a matching top. 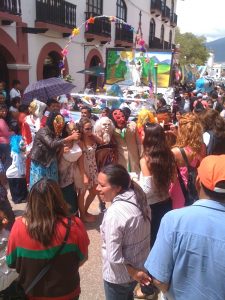 All in all it was a fine interesting and fun trip. Good to be home though.

I don’t usually solicit charity stuff here as I don’t believe in charity (just kidding of course) but I’m playing in a charity ball hockey tournament with some famous hockey players and rock stars this Saturday so if you’d like to help cross-check cancer in the face, your donations would be much appreciated. In addition, if you donate $20 or more I’ll toss in a free rental at either Black Dog locations! Win-win right? You get to help face-wash cancer and nab a nifty film for your viewing pleasure. Thanks ~ Here’s the link… http://rhcc.akaraisin.com/pledge/Participant/Home.aspx?seid=4876&mid=9&pid=903444

Oh and one more thing – over yonder on the Black Dog Facebook page I’m doing a little thing were I post a daily horror film recommendation in honour of Halloween month! I’m aiming to highlight some great little scary numbers that you may not have seen. “Like” the page and hopefully like the recommendations.

Oh and one more thing as well. Seems I over ordered Blu Ray copies of Prometheus and my lame distributor won’t let me return them so we’ll be selling them off – about 5-6 for each store – for a paltry $19.99 plus tax. (thats $5 cheaper than Best Buy). They are what’s called a “Rental Exclusive” so there’s no special features or anything.

A Cat in Paris – Oscar nominated animated fare finds a cat in an unnamed town (wait, I think that it’s Paris!) who has to rescue a little girl from some gangster’s clutches. I wish I had some clutches. Got to get me some clutches! Supposed to be quite amazing. [youtube]http://www.youtube.com/watch?v=0zayGVHDOBg[/youtube]

Excision – Creepy, nasty, and altogether (from what I’ve read) excellent little horror number about a freaky girl who wants to become a surgeon and has vivid depraved dreams of necrophilia. Cool. We’ve all had those dreams. Right? Right? Hello? Red Band trailer -[youtube]http://youtu.be/SB6dARkyl8g[/youtube]

The Giant Mechanical Man – Good natured rom-com about a couple of people who work at a zoo (probably a fairly depressing one) who fall in love. [youtube]http://www.youtube.com/watch?v=T5D8JMsPk3o[/youtube]

Prometheus – Here’s a film that’s both fun and disappointing at the same time. Fun because it’s a big loud ambitious sci-fi number that chugs along at a pretty good pace but ultimately disappointing because it doesn’t really make all that much sense. Considering the talent involved and the fact that they had over 30 years since the original Alien to come up with a coherent and involved story and this is the best that they could do, I was a bit let down. If you like the Alien universe, you’ll have to check it out for sure. Also on the Blu Ray. After watching it, I’m sure you’ll have a few questions of your own as to what you just viewed. [youtube]http://www.youtube.com/watch?v=sftuxbvGwiU[/youtube]

And after you watch it watch this funny take on the film – [youtube]http://www.youtube.com/watch?v=-x1YuvUQFJ0[/youtube]

The Raven – John Cusak plays a gun wielding Edgar Allan Poe on the trail of a vicious (is there a non-vicious version?) serial killer who is inspired by Poe’s stories. Uh-huh. Also on the Blu Ray. [youtube]http://www.youtube.com/watch?v=GZb2pLKiYEk[/youtube]

Seconds Apart – A pair of telepathic twins terrorize and slaughter their classmates. Usually it’s just one twin who’s the bad one. Too bad this wasn’t a documentary. [youtube]http://www.youtube.com/watch?v=5AcHXgqeqmo[/youtube]

That’s it for this week folks. I’ll leave you with this choice comic from The Onion for all you cat lovers out there…http://theoatmeal.com/comics/cats_actually_kill