October is the best month. The air has taken on a nice crisp quality, the dreaded heat of the summer has finally subsided, the fruit flies and scorpions are all gone from my kitchen and Halloween is soon upon us. It’s no secret I love the Halloween, even with it’s crass commercialism and sexy sexed-up costumes, I still think it’s the best celebration of the year. I loved Halloween as a kid and still do as an old man. I grew up loving horror films, much to my mother’s and girlfriend’s, wive’s and secret wive’s chagrin. I’m not too sure what it is that I love about them either. Is the intensity, the violence, and dread? Yes, yes and yes. I abhor violence in real life – hell I don’t even like fighting in hockey anymore (like seriously, why is actual punching each other in the face part of a game? It’s bizarre if you think about it). But gimme a chainsaw through the head, an axe in the intestines, eyeballs ripped out and eaten, needles in the ear or whatever and I’m a happy guy. Not to say that I just enjoy the violence, some of my favourite scary movies aren’t violent at all. A film like The Haunting (1963) with it’s great gothic mansion, black and white cinematography and the amazing use of sound is as scary as anything out there! Horror films and TV is all I’ve been watching so far this month and I wouldn’t have it any other way. 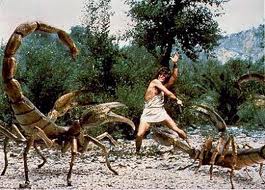 “Get out of my kitchen!”

As mentioned in the previous newsletter we’re (I’m) doing a 31 days of Halloween film fest recommendation on the Facebook and the Twitters. You can follow us on those if you want a daily dose of scares.

So far, the first picks are as follows;

There’s something cool a-brewin’! DOXA is presenting this fine film and you can win a pair of tickets courtesy of Black Dog. More info on that next week. Check this out if yer interested.. http://www.doxafestival.ca/motionpictures/rewindthis

After Earth – Will Smith and his sprog, Jaden, crash land on an abandoned earth in the future. They must work together to survive bad CGI monsters, poor dialogue and shoddy direction from M. Night Shamalama-ding-dong. Whatever happened to that guy? Such promise with his first few films and now he’s making stuff that ends up on everyone’s worst of the year list. Jerk. Also on the Blu Ray.

American Horror Story: Asylum – Season 2 of this fine, creepy TV show. Jessica Lange kills it as a twisted nun (let’s hear it for twisted nuns everywhere!) in charge of an insane asylum in the 60’s. Pretty much every horror movie ever made sees a bit of light in this bat-shit crazy awesome series. I managed to devour 6 episodes over the weekend and am still hungry for more. Great stuff.

Batman: The Dark Knight Returns – Animated Batman show that supposed to be pretty good although it would be nice if they could title a Batman show without using the words, “Dark, Knight, Returns, Rises, Grunts or Begins”.

Curse of Chucky – Everyone’s favourite possessed homicidal talking doll is back to dismember and butcher anyone who gets in his way. Awww. He’d be a great halloween costume for your child. Think about it. It’ll be late on the shelves at Cambie St.

Frozen Ground – John Cusack continues his streak of playing creepy killers (see The Paperboy, no really, you should see The Paperboy) in this thriller in the vein of Se7en. Nic Cage and his big rubber head plays the cop on his trail. Set in Alaska, hence the ground being frozen and all. Also on the Blu Ray.

Hangover Part III – They’re still making these, eh? I have to assume that contractual obligations keep Bradley Cooper and Zach Galifianakis coming back for more of this mundane stupidity. But you know what happens when you assume things…Also on the Blu Ray.

The Hunt – One of the year’s best flicks stars the Mads Mikkelsen as a teacher who gets falsely accused of some heinous crime (I bet we can all imagine what it might be). From Thomas Vinterberg who made the most excellent The Celebration.

In the Flesh – Great zombie TV show from the BBC about an undead kid named Kieren who tries to, after much rehabilitation and medication, integrate back into society. Video store sounds like a good place for him to look for a job. Sounds like a nice fresh take on a stale and rotting genre. (Get it? See what I did there?)

Much Ado About Nothing – Joss Whedon takes off the superhero pants for a bit to give us a modern take on the fine Shakespeare comedy. A sexy comedy of errors and misunderstandings at Whedon’s house sets the stage for much ado about fun! Ahem. Also on the Blu Ray.

The Purge – Great idea but, from what I’ve hear, poorly executed. The premise – one night a year all crime is legal so everyone can go nuts and kill and plunder and run stop signs (like people only do that on Purge night). Ethan Hawke and Cersei barricade their family in their fortress of a house only to be invaded by some punks wearing creepy masks. My question is, if crime is legal for this night, why are the perps wearing masks? Maybe it’s just best not to ask too many questions about a film like this. Also on the Blu Ray.

Robot Chicken Season 6 – Love me the Robot Chicken. You’ll love it as well, but only if you have a sense of humour and a grasp on popular culture. Which of course you do.

Room 237 – Doc about Kubrick’s The Shining (You’ve heard of it, right?) and all the hidden messages, meanings and whatnot in it. Supposedly not endorsed by the Kubrick estate. But what is? Some of it is a little far-fetched and some of the folks interviewed sound a bit like crack-pots but it makes for a fun viewing experience. Also on the Blu Ray.

Stuck in Love – Romantic comedy/ coming of age/ reflection of growing old/ jungle cannibal flick (well maybe not so much the cannibal part) stars Greg Kinnear, Jennifer Connolly and Logan Lerman – man I love saying that dude’s name! Try it, you’l like it.

We Steal Secrets – Doc about Julian Assange and the creation of Wikileaks. From prolific academy award winner Alex Gibney. I’m sure that this doc isn’t endorsed by the US government or any government with anything to hide really. Which would probably include every government that’s ever existed. Whatever side you fall on the whistleblower issue, this looks like it’s worth your time.

Recently Viewed and Approved for Your Eyeballs

Hope everyone has a fine, safe week. Here’s fun little video of some coffee enthusiasts getting pranked in a cafe in NY…http://laughingsquid.com/angry-young-woman-uses-her-telekinetic-powers-in-a-nyc-cafe/