So, I hosted my first Oscar party the other night. Much booze, good food and an Oscar pool (I got clobbered) with great friends made for an enjoyable evening. Too bad it was an Oscar party and not just a regular Sunday night party. I don’t know why I torture myself with this nonsense every year. It’s like a car/train/plane/boat/motorcycle/Segway wreck – I want to watch but I feel cheapened and guilty for looking. What an awful show it was. The host, Family Guy or Ted or whatever his name is, was terrible. I can forgive jokes that are offensive (I actually quite like offensive things) and all that if they’re funny. Dude was not funny. A crashing bore he was. The entire show was a bore, snore and a chore to get through. Maybe it’s because I’ve only seen one of the nominated films – Tarantino’s spaghetti-western-blacksploitation-nazi-killing-kung-fu revenge thriller, or maybe it’s because the Oscars don’t reflect my taste in films and they really mean nothing to me in the world of movies (that died when Driving Miss Daisy won in 1989) or maybe because it’s just an over-long wank-fest with millionaires handing out gold statues to each other, but I really have hardly any interest in any of these awards shows. And this year’s show was pretty bland only highlighted by a few things: that trio of creepy white-haired coke wizards, Meryl Streep picking at her butt and Anne Hathaway’s Les Nipplerables. I was happy to see some films win – the documentary winner Looking for the Sugar Man (I guess they found him as he’s playing the Commodore soon), the guy from Inglorious Basterds winning again and Steven Spielberg not winning for his movie about that vampire killer, Abe Lincoln. Still, it was a fun night. Did I mention the booze and the food? 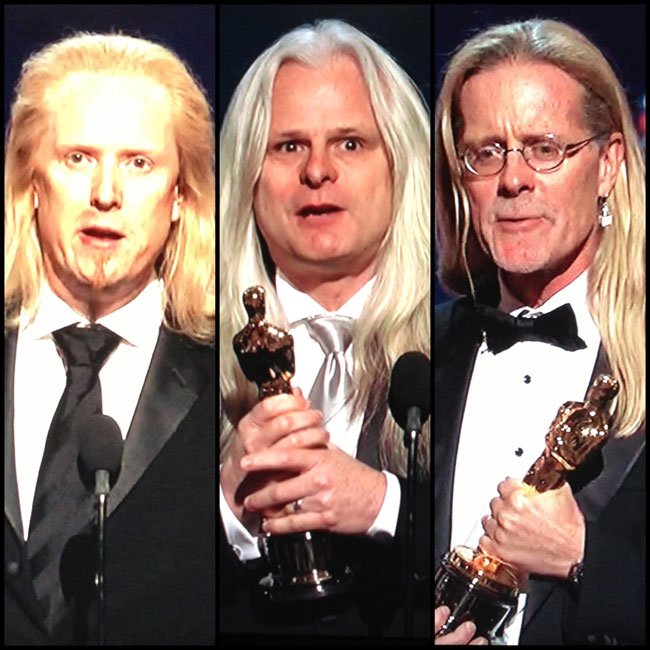 Hypnotizing, these wizards are. “Come into my room.”

The previously-viewed DVD sale continues at both stores. I just tossed in a pile of foreign DVDs, including films from France, Germany, Italy, Spain and Latin America, into the sale bin at the Commercial store. Hopefully adding more to the coffers at Cambie this week. I filled the boxes with Blu Rays and some older new releases last week. Good deals to be had my friends – DVDs are $5 each or 3 for $12 and the Blu Rays are $8 each or 3 for $20. Get ’em while they’re there. Follow the proceedings on the Facebook and the Twitters if you want to stay abreast of what is being added and when. https://www.facebook.com/blackdogvideo and https://twitter.com/blackdogvideo

Cheerful Weather for the Wedding – Oh-so-British tale of eccentricities, misunderstandings and upper-crusty-lip manners as a woman, her fiancé and her former lover fret on her wedding day. Is that a really good idea – to invite your former lover to your wedding? That’s something I’d expect from the French, but the British? Why I never! [youtube]http://www.youtube.com/watch?v=2Tyhvd6t75A[/youtube]

The Factory – Oh John Cusack, what has happened to you? Do you not even bother to read your scripts anymore? Maybe you do and you really wanted to be involved in this by-the-numbers cop on the track of serial killer in lovely Buffalo, NY film? Or maybe you need to buy a new boat or have your bathroom remodelled, or maybe you just lost a bet. Anyways, we’re still holding out hope for ya, buddy. Also on the Blu Ray. [youtube]http://www.youtube.com/watch?v=6ixbx7lp4Es[/youtube]

The Forgiveness of Blood – Albanian blood feud forces the oldest kids in the family into protecting and providing for the family. If you’ve ever been in a blood feud, especially an Albanian blood feud, you know how intense and bloody these things can get. From the director of Maria Full of Grace. [youtube]http://www.youtube.com/watch?v=STaxtLXOs28[/youtube]

Freaky Deaky – Elmore Leonard penned comedy/thriller set in LA in 1974 that follows a pair of bomb-making radicals who use their skills to succeed in business. Many strange characters (with a cast that includes Cripsin Glover, Andy Dick and Christian Slater, there’s gonna be some weirdness) pop up along the way. Never heard of this one so you takes yer chances. [youtube]http://www.youtube.com/watch?v=kvmRkYb4OuI[/youtube]

Paul Williams: Still Alive – Doc about the short, sexy 70’s icon and what he’s up to these days, his turn ons, his turn offs, you know. For me he’ll always be known as Swan. [youtube]http://www.youtube.com/watch?v=z-Gc-fW_aSU[/youtube]

Scooby-Doo: Mask of the Blue Falcon – Ruh-Roh! The gang take on a mysterious case. [youtube]http://www.youtube.com/watch?v=usCd7fItBOk[/youtube]

The Thieves – AKA Dodookdeul – Korean Ocean’s 11 (not 12 or 13 though) type heist auctioneer set in Macau. Suppose to be a pretty good yarn. For those of you who enjoys fine yarn. Also on the Blu Ray. [youtube]http://www.youtube.com/watch?v=xyIirn780zs[/youtube]

Twilight: Breaking Bad Part II – Winner of a slew of awards http://www.razzies.com/history/13winners.asp– comes the last (thank any merciful god) of the Twilight flicks. Have not seen one minute of any of K-Stew, the pasty sparkly vampire guy or the waxy-looking teen wolf kid that’s so popular with the kids these days. And I’m hoping to keep it that way. Also on the Blu Ray. [youtube]http://www.youtube.com/watch?v=2DYH2t8fCqo[/youtube]

We just finally received a long-awaited shipment of Criterions!

Also this crazy bit of craziness

And speaking of Oscars and shit, here’s a fun chart tracking many past Oscar travesties. Cool. See ya all next week! 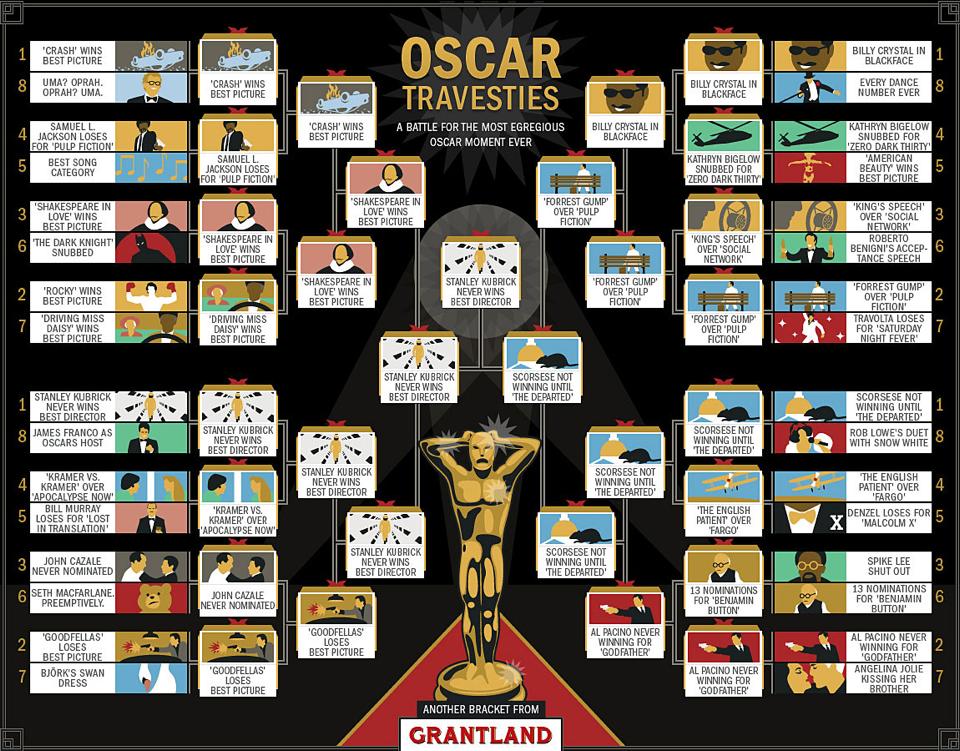