Another Father’s Day has come and gone. For some reason it seems that Father’s Day takes a backseat to Mother’s Day. Just because mom carried you around like a giant watermelon tucked under her skin for nine months and then spent untold hours forcing you out of her body, her day gets all the hoo-haw. Just kidding, of course. Go moms! I had a pretty great day Sunday. My little guy let me sleep in till around 10 and then surprised me with a card and a small tile he made in school. It was his depiction of a rainbow coloured Angry Bird. I guess he assumes that I like the Angry Birds as much as he does as the card he made was Angry Birds as well. Pretty sweet. Maybe a tad creepy. 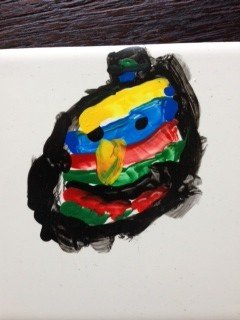 How would you like that staring at you all night?

We then spent the day wandering around the Drive for the fine car-free day event. I’m always amazed at how many people drive to the car-free day. It seems to me that the whole “car-free” part of the day is lost on them. Crossing 1st it was sad to see so many people trapped inside if their cars, stuck in traffic while we wandered around, beer in hand anjoying the festivities. Lots of good music and food and a general cool vibe at this year’s event. Probably the most interesting thing I saw yesterday was a huge tortoise walking around with a small dog on it’s back. Good times (maybe except for the tortoise). 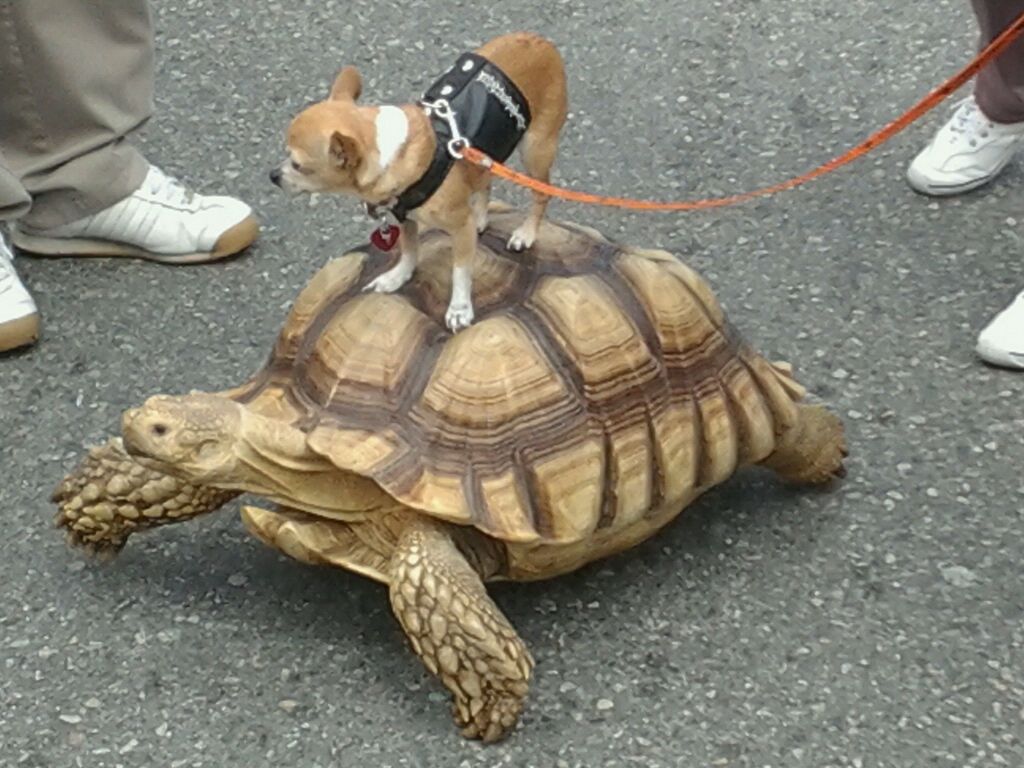 And whatever this was… 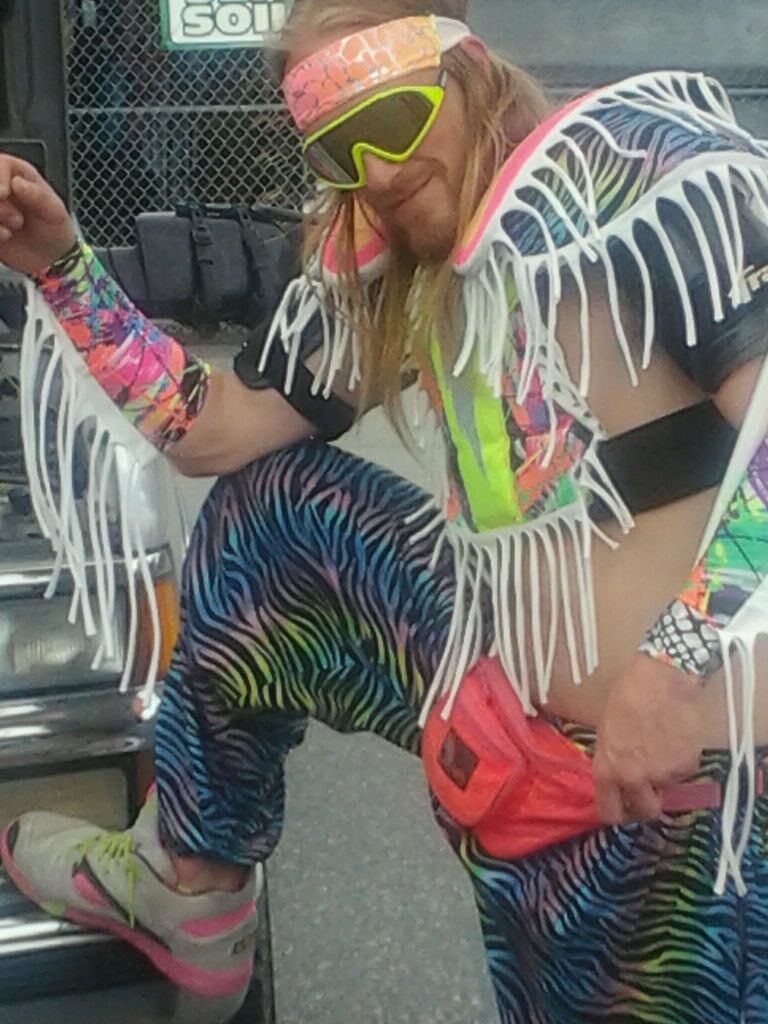 Just a reminder about the swell deals we have going on almost everyday at Black Dog. Monday – 2 for 1 films, Wednesday is 5 old films for $10 and Sunday to Thursday you can get two films, one old & one new or 2 old, for a mere $7. You’re saving money renting with us!

We also have a little contest for today. Win a couple of tickets to see It’s a Disaster! [youtube]http://www.youtube.com/watch?v=CA9S6NgzNYE [/youtube]at the Rio tonight. It stars David Cross among others. Just tell us this insanely hard trivia question – How many seasons did Mr. Show last? First one to chime in wins the tickets!

21 and Over – A celebration of a dude turning 21 soon devolves into a night of debauchery and humiliation. Of course it does. Sounds like my wedding night. There may or may not be a bear involved. Just warning you. Also on the Blu Ray. [youtube]http://www.youtube.com/watch?v=Bc9vHeGNTY0[/youtube]

American Mary – Great local horror number from the Twisted Twins, Jen and Sylvia Soska, finds a disillusioned and broke medical student finding her interests leading her into the world of underground surgeries. I do like the sounds of that. Hmmm, maybe that could be a new career for me. If only I wasn’t so squeemish at the sight of blood and all the gross stuff one finds inside the human body. [youtube]http://www.youtube.com/watch?v=MJtVBD6DlX8[/youtube]

The Brass Teapot – A couple finds a magical brass teapot (see title) that magically spoots out money whenever they hurt themselves. Just how far will they go to buy all the stupid shit that they want? I had a magical chamber pot once but it didn’t spoot out any money let me tell you! [youtube]http://www.youtube.com/watch?v=g30KBZ4m61Y[/youtube]

Jack the Giant Slayer – Updated, CGI laden Jack and the Beanstalk retelling. A war breaks out between puny humans and giant giants (one of whom looks kinds like Klaus Kinski for some reason). Heard mixed things on this one from “it’s a fun romp that’s not to hard on the mind” to “shoddy CGI, bad acting that’s pretty hard on the mind”. You be the judge. Be it! Also on the Blu Ray. [youtube]http://www.youtube.com/watch?v=mnfgjDu9t28[/youtube]

Movie 43 – A strong contender for worst film of the year (expect to see it topping many a list) finds a bunch of short stories starring a bunch of people who should know better. I’m looking at you, Hugh Jackman, Kate Winslet, Dennis Quaid, Naomi Watts, Snooki (well maybe she wouldn’t know any better), Emma Stone and just about everyone else in Hollywood. [youtube]http://www.youtube.com/watch?v=8jDp2D2zWMI[/youtube]

Quartet – Fine older British actors – Maggie Smith, Tom Courtenay, Billy Connolly – act in this fine little drama about old muscians getting ready for a concert of sorts. Directed, for some reason, by Dustin Hoffman. Also on the Blu Ray. [youtube]http://www.youtube.com/watch?v=mfbzS6f8cXI[/youtube]

Stoker – Cool looking film from the great Korean director, Chan-wook Park (Oldboy) about a creepy family and the creepy uncle who comes to stay after dad dies. Has the Nicole Kidman in it who can do unstable, creepy ladies pretty darn good (see The Paperboy). Can’t wait to check this one out. Also on the Blu Ray. [youtube]http://www.youtube.com/watch?v=btm7WjSwPmQ[/youtube]

Tower Block – A sniper picks off residents of an apartment building for some reason. Sounds like one of many of my twisted fantasies. Everyone has this fantasy right? Did I say that out loud? Hello? [youtube]http://www.youtube.com/watch?v=BthurECmLqI[/youtube]

Wilfred Season 2 – More fine comedy that finds a manic depressive Frodo who inexplicably is the only one who can see his neighbor’s dog as a full grown man in a dog suit.

Crimewave – Comedy thing written by the Coen Brothers and directed by Sam Raimi! Hello! Also on the Blu Ray

That’s it for this week folks. Here you are your moment of hilarity…Thinking of signing up for the gym? Go right ahead…http://www.someecards.com/2013/06/17/the-most-absurd-things-ever-seen-at-the-gym-aside-from-you