I hope that everyone had a real special “Family Day” holiday yesterday! I played some hockey so I had a good time. But seriously, Family Day? That’s the best they could come up with? They had a chance to invent a new holiday and give it a cool name and that’s what they decided to call it, Family Day. I have a family and I thought that it was lame. Come on people put some thought and creativity into it! If they had asked me I could have given them a dozen or so better names than freaking Family Day. Maybe something along the lines of You’re a Disappointment and an Embarrassment Day, Who’ll Stop the Rain Day, Sushi Appreciation Day, Wave All Your Fingers at Your Neighbours Day, Manitou Day, Doris Day, Day of the Locusts, Zombie Awareness Day, Public Sleeping Day, Stepping on Lego Day, Hoodie Hoo Day, Day the Earth Stood Still Day, Daniel Day Lewis, Talk Like a Pirate Day, Walk Like an Egyptian Day, Magical Happy Unicorn Day, Pine Beetle Day or maybe Hug a Hobo Day. Just a few ideas. 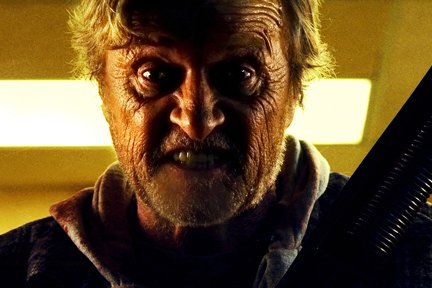 Hug Me or I’ll murder your face!

We’re gonna be doing our annual DVD and Blu Ray sell off soon – I want to get it started hopefully sometime this week. I’ll be posting when and what and where and why on the Facebook page and the twitter thingy when I do. If you’re not signed up, you may want to. Just saying….https://www.facebook.com/blackdogvideo and https://twitter.com/blackdogvideo

Drunk and on Drugs Happy Funtime Hour – Don’t really know what this is but I think that it has something to do with the Trailer Park Boys. I have a sneaking suspicion that and there may be some drugs and drinking afoot. [youtube]http://www.youtube.com/watch?v=vxYdU51W0fI[/youtube]

Eye of the Storm – Australian effort directed by Fred Schepsi (Roxanne) starring Charlotte Rampling, Geoffrey Rush and Judy Davis about a mean woman who goes about choosing her time and place to die. Or something like that. Looks very drama-dramedy. [youtube]http://www.youtube.com/watch?v=VdXcFB3vjrk[/youtube]

Hello, I Must Be Going – Sorry, this has nothing to do with Phil Collins. It’s a drama/comedy about a young divorcée who moves back in with her parents. Hijinks, I presume, ensue. [youtube]http://www.youtube.com/watch?v=g71WfCXUTrY[/youtube]

Inescapable – Thriller about a dad who has to return to Syria after being away for 30 years when his daughter goes missing in Damascus. Probably not the best time to travelling around Syria me thinks. Even if you’re with Pacey or Marisa Tomei. [youtube]http://www.youtube.com/watch?v=2-SOgKS4EAQ[/youtube]

Man With the Iron Fists – Dope kung fu flick that’s “off the hook” (actually I have no idea if it’s off the hook or not, even with the quotation marks around “off the hook”) as it was written and directed by and stars RZA from The Wu Tang Clan. Even has Russell Crowe in it for those of you who like that sort of thing. Also on the Blu Ray [youtube]http://www.youtube.com/watch?v=_15pOvbu4kk[/youtube]

Perks of Being a Wallflower – Most excellent, from what I’ve heard, coming of age type film about an introverted teenager (Logan Lerman, man I love saying that name. Say it, Logan Lerman. Good times, no?) who is taken under the wings of a couple of older dudes who help him navigate the choppy waters of the real world. Also on the Blu Ray. [youtube]http://www.youtube.com/watch?v=aog8680PVmU[/youtube]

Putin’s Kiss – Young girl involved in a type of “Hitler Youth” organization, but the Russian version – the Nashi, starts to question the outfit’s motives and tactics when a liberal journalist friend of hers gets beaten up by some Russian government thugs. I’ve been beaten up by a lot of thugs in my time and I have to tell you that the Russian thugs are the worst. [youtube]http://www.youtube.com/watch?v=7rSbCJxrGMY[/youtube]

Skyfall – Ooh! The new Judi Dench movie! Everyone went apeshit over this latest James Bond instalment. Not too sure why. I thought it was just pretty good. The villain, Anton Chigurh, was OK but the entire plot of the movie wasn’t really up to snuff for a James Bond film. I want my super-villains to strive for world domination, not just attempt to whack an old lady. Speaking of Judi Dench, there’s a scene near the end where there’s a tight close-up on her face. I saw this film in the theatre and the angle that this scene is shot at you can see right up her nose. I swear I could almost see her brain. It was so large on the screen I half expected to see someone folks spelunking in her nostril. All that said, it’s still worth a look, if not just for the opening sequence alone. Also on the Blu Ray. [youtube]http://www.youtube.com/watch?v=6kw1UVovByw[/youtube]

Sushi Girl – Crazy sounding film about a guy just released from prison, some thugs who want a pile of missing loot and a naked girl that they eat sushi off of. Sounds good, no? What if I said it had Tony Todd and Mark Hamill in it? Interested now? [youtube]http://www.youtube.com/watch?v=uWQDSN7UjHU[/youtube]

That’s it for this week folks. Hope you have a safe and happy next 7 days. Till we meet again…