Tis the season and so forth so here we are recommending Christmas movies you may or may not or may enjoy. We’ll do one a day up until the 24th of December and then you’re on your own.

The Ref (Ted Demme 1994) – Dennis Leary breaks into a bickering couple’s (the wonderful Judy Davis and, er, um Kevin Spacey) house and, for some reason, is forced to spend Christmas with them. Hilarity ensues. Boy does it ever. Good if you like to laugh. 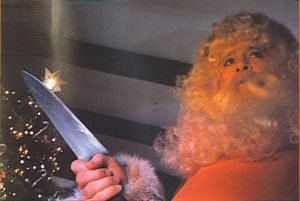 Christmas Evil aka You Better Watch Out. (Lewis Jackson 1980) – Let me just start off by saying that this is not a good movie. Very low budget, dodgy acting and direction, it makes no sense. But why am I recommending it you ask? Because it’s weird and strange and fun! John Water’s favourite Christmas film is about a guy, scarred as child after seeing Santa caressing his mom’s thigh, who grows up to be a crazy, good/bad child enthusiast with homicidal rage tendencies. I laughed a good number of times. For those of you who are into this type of thing. 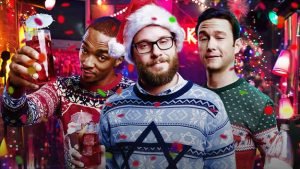 The Night Before (Jonathan Levine 2015) – Fun cast, hilarious drug sequences (no-one does baked better then Seth Rogan) makes this a good time holiday party movie that’s even a bit sweet. Not the best thing out there but you could do worse.

Rare Exports (Jalmari Helander 2010) – Fun Finnish film finds Santa buried deep in a mountain. What happens when he’s excavated? What happened to all the kids in the town? What’s with the creepy old man elves wandering about? Dig into this terrific slice of Christmas cake. 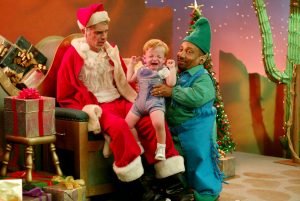 Bad Santa (Terry Zwigoff 2003) – Mean, cynical, hilarious, rude, charming, gross. One of these words does not describe this holiday classic. Billy Bob Thorton is at his best (or worst) as a terrible mall Santa with crimes and sex on his wasted mind. Don’t watch this with your mother-in-law like I did. 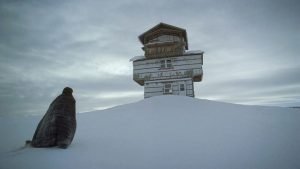 The Lodge (Veronika Franz and Severin Fiala 2019) – Soon-to-be stepmom Riley Keough is stranded in a remote cabin with her boyfriend’s two kids over the Christmas holidays. Things start to get weird in this creepy Christmas thriller-chiller! 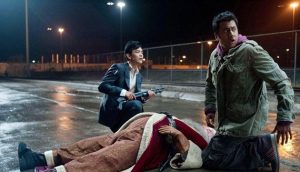 A Very Harold and Kumar ChristmasÂ  (Todd Strauss-Schulson 2011) – Stoners Harold and Kumar are back, getting stoned and ruining Danny Trejo’s Christmas tree. And Neil Patrick Harris is along for the goofy, some might say, hilarious ride. *note – I watched this last night and it is quite dated and terrible and embarrassing. I cannot, with good conscience, recommended this movie. * 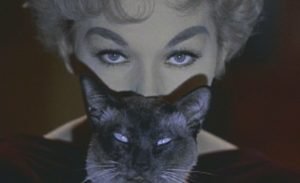 Bell, Book and Candle (Richard Quine 1958) – Finally saw this charming little number after so many years. Pyewacket the cat stole the show (as cats are apt to do) as Kim Novak’s lonely witch character’s familiar. A nice romp but for the life of me I couldn’t figure out why either of these two lovely women would be interested in stodgy old James Stewart. 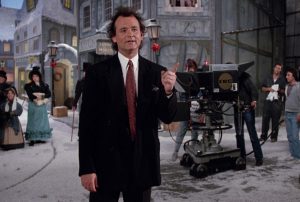 Scrooged (Richard Donner 1988) – While it’s not the best version of this oft-told tale – it’s not a particularly well-made movie and it’s tonally all over the place, this version has Bill Murray as Scrooge and a great supporting cast highlighted by Carol Kane’s violent Ghost of Christmas Present. You could do worse than this film. You could also do better. 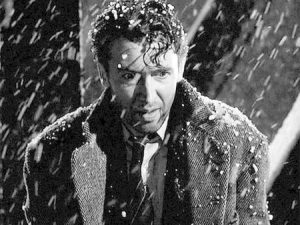 It’s a Wonderful Life (Frank Capra 1946) – Ya, ya, I know, it’s THE Christmas movie of all time but I just recently discovered this film after years of avoiding it because I thought it was all schmaltz and lame. But for a movie about Christmas suicide, it’s pretty warm and uplifting (maybe a tad too sentimental), but then again, the older I get the more I can dig these kind of sentiments. To a point. Enjoy. 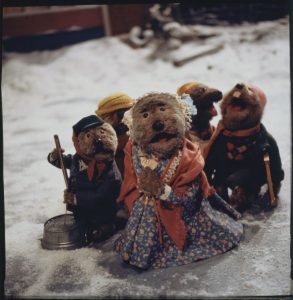 Emmet Otter’s Jug-Band Christmas ( Jim Henson 1977) – I have never actually seen this (nor heard of it until recently) but Dylan loves this thing and made me bring it into the shop. Seems it’s about some hick country otters who enter a talent contest (jugs may or may not be involved) to win some much needed cash. Christmas spirit,Â I presume, flows mightily from these jugs. 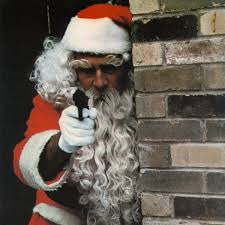 The Silent Partner (Daryl Duke 1978) – Excellent Canadian thriller has Elliot Gould as a bank teller who thwarts a robbery by funneling the money into his own account. Christopher Plummer’s crook ain’t none too happy about this. Oscar Peterson jazzes up the score and cold-ass Toronto has rarely looked better. Bonus points for having a young John Candy in it! Dig into this forgotten gem. 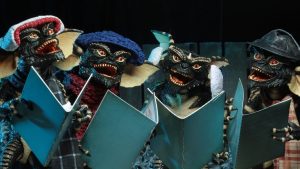 Gremlins (Joe Dante 1984) – Everybody loves Gremlins, right? We sure do. Holiday mayhem ensues as these nasty little creatures are let loose during the holidays to tear up the town and get all up to no good! A classic! 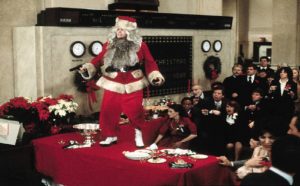 Trading Places (John Landis 1983) – There’s been a little debate about this film if it actually holds up or not (the 80’s seem like a decade from another planet). I haven’t seen it in a long time but I remember liking it quite a bit back in the day (hence the recommendation). Must watch soon! What do you folks say? 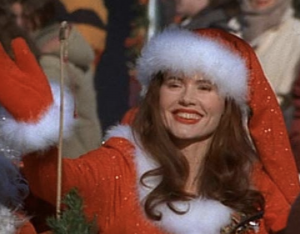 The Long Kiss Goodnight (Renny Harlin 1996) – Geena Davis kicks a ton of ass as an assassin with some memory loss as she teams up with classic Samuel L. Jackson to solve the mystery and kick some more ass. One of the few good and fun Shane Black written films out there that, for some reason, all take place at Christmas. We did this one for the podcast last year and had a blast with it.

Christmas in Connecticut (Peter Godfrey 1945) – Delightful screw-ball comedy has Barbara Stanwyck as a food writer who has lied in her columns about being a great cook. Of course she’s invited to her boss’ country estate for the holidays to cook for them. Madcap hi-jinks ensue! 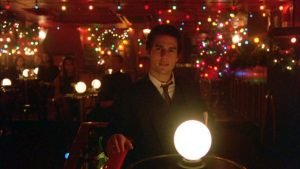 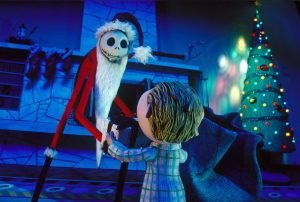 Nightmare Before ChristmasÂ (Henry Selick 1993) – Full disclosure: I’ve never seen this film. But it’s not all about me, right? From most accounts, this is some wonderful stop-motion animated fare about a skeleton Halloween man who discovers a Christmas town and things happen after that. Sounds intriguing! 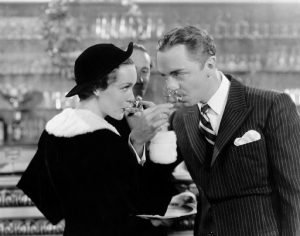 The Thin Man (W.S. Van Dyke 1934) – A Black Dog favourite! Nick and Nora Charles look to solve a murder at Christmas time and enjoy a few cocktails along the way. Everything about this film is brilliant – cast, script, dog. Sit back with your favourite beverage and enjoy! 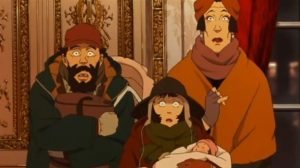 Tokyo Godfathers (Satoshi Kon 2003) – Lovely animated fare from Japan finds three homeless folks who find a baby in the trash on Christmas Eve. They then set out to find the garbage baby’s parents. Adventures and hilarity and other things ensue. 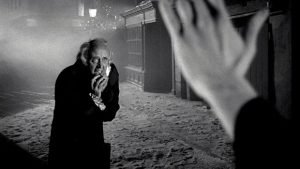 Scrooge (A Christmas Carol) – (Brian Desmond-Hurst 1951) The most faithful and the best version of this way-to-often told tale (looking at you WKRP and Family Ties!). Sure it’s earnest, sure it’s corny, but it is done with such heart and conviction, the black and white cinematography is outstanding and featuring one of movies greatest performances in Alastair Sim as Scrooge, this Christmas Carol cannot be beat. His transformation after the ghost visits will leave you with a huge smile on your face and if you don’t tear up a few times, especially where Tiny Tim in involved, then your heart is 3 sizes too small. I’ve watched this film almost every Christmas Eve since 1988. Much love and I hope that you all have a very fine Christmas indeed!

This entry was posted in Film Reviews / Recommendations. Bookmark the permalink.