It’s our favourite time of the year – October/Halloween! And even thought it’s alarmingly warm, we’ve got some devilishly hot horror movie recommendations to thaw your cold dead heart. We will toss up one a day here for the entire month with a slant towards some scary things that might have passed you by (sprinkled with some favourites!). Sit back, strap in and enjoy the ride! 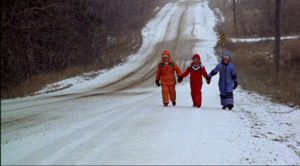 The Brood (David Cronenberg 1979) – Something weird is happening in an unconventional therapist’s (Oliver Reed – natch) office! What are those nasty little gremlin-like creatures? What’s growing out of Samantha Eggar’s belly? Why does Art Hindle always look so good in winter coats? These and other questions may or may not be answered in this Canadian horror classic! 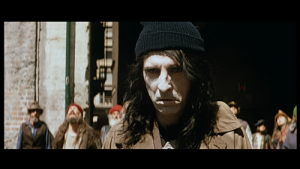 Prince of Darkness (John Carpenter 1987) – Love this weirdo Carpenter entry about some folks finding a mysterious cylinder on a creepy church (are there any other kinds?) whose contents may mean the end of the world. Donald Pleseance and others are there to deal with the horror. Plus Alice Cooper shows up to kill someone with a bicycle.

Terrified (DemiÃ¡n Rugna 2017) – There’s some supernatural shenanigans going down in a nice neighborhood in Buenos Aires! Who ya gonna call? A former cop who used to dabble in the paranormal? Another cop who’s afraid of everything? A doctor specializing in ghost and things? Check! Very good little chiller that with some nifty, creepy images. 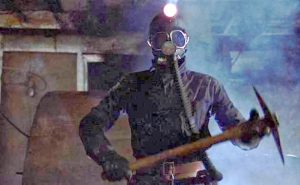 My Bloody Valentine (George Milhalka 1981) – Fun, gory Canadian effort looking to cash in on the holiday murder craze of the 80’s (April Fool’s Day, Halloween, Mother’s Day etc) is delight from tip to tail, using the already creepy setting of a mining town as it’s backdrop. We did this one for the podcast last year and loved it!

Sleepaway Camp (Robert Hiltzik 1983) – This movie was made for me! Awesome 80’s fashion and music, strange weird characters, over-the-top violence and fun killings and a ending to die for. So much fun!

The Innocents (Jack Clayton 1961) – Stay away from this year’s remake (The Turning) and lean into this classic ghost story! I love ghostly goings ons in movies and this one rises above most as Deborah Kerr is convinced the grounds of the mansion where she’s looking after a couple of kids is haunted. You decide! 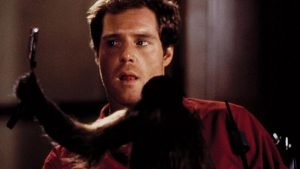 Monkey Shines (George Romero 1988) – I love this hilarious , creepy “paralyzed man’s helper monkey gone bad” film! We did this for the podcast last year and it garnered high marks with all! So many choice moments but it may make you think twice about getting that monkey you’ve always wanted to do your chores and your bidding! A warning: don’t mess with nature! 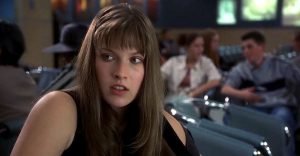 Final Destination (James Wong 2000) – These movies are fun! At least the 3 that I saw (maybe I saw 4 or 5, they kind of blend into each other). The premise sets up nicely for a lot of creative way to kill folks – surviving a plane crash, car wreck, roller coaster mishap, pileup on the Lion’s Gate bridge only means that death will hunt you down and do you in. Make it a drinking game! 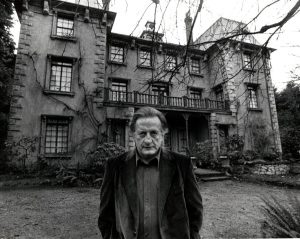 The Changeling – (Peter Medak 1980) – Old man George C. Scott (he was always an old man) takes up residence in a huge old haunted mansion after the death of his wife and child in a car accident. Good ghostly happenings are in store. You may never look at a rubber ball quite the same way again. 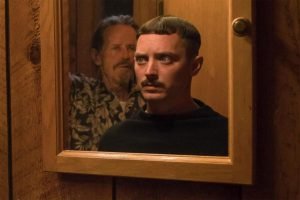 Come to Daddy (Ant Timpson 2019) – Norval (Elijah Wood) travels to the far reaches of Tofino at the request of his long lost dad hoping to reconnect and find some stability in his chaotic life. But, of course, things don’t go as planned. Loved this fun, bloody weirdo film. I think you might as well! 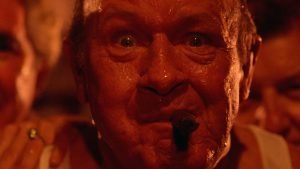 Tigers are Not Afraid (Issa Lopez 2017) – Wonderful, sad tale with supernatural elements finds some kids trying to survive the violent, intense streets of Mexico city. And there’s some ghosts! Check this one out for something different. 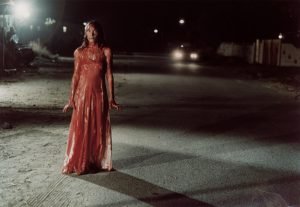 Carrie (Brian De Palma 1976) – Poor, shy Carrie White has a tough time at school and at home (with her crazy mother, Piper Laurie). But she also has telekinesis powers that she unleashes at the school prom in the films amazing climax. Oh and don’t forget about that ending! 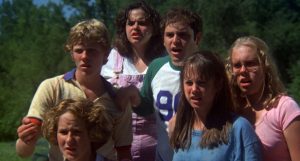 The Burning (Tony Maylam 1981) – Not the most original if ideas (but maybe it was in 1981?!) – a summer camp caretaker gets horribly burned (see title) by some miscreant teenagers. Armed with his trusty (rusty?) garden shears, he seeks revenge! Good bloody mayhem ensues with some great practical effects courtesy of Tom Savini. Watch for a young Holly Hunter and Jason Alexander! 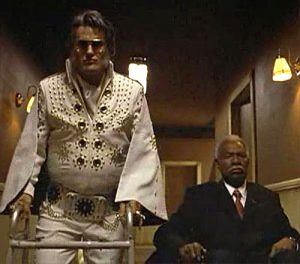 Bubba Ho-Tep (Don Coscarelli 2002) – Bruce Campbell is Elvis and Ossie Davis is JFK who live in a boring nursing home until an ancient Egyptian mummy shows up and starts sucking the residents souls out of their assholes. They team up to fight the mummy! From the creator of the Phantasm series, this awesome film is both hilarious and scary at the same time and at different times. 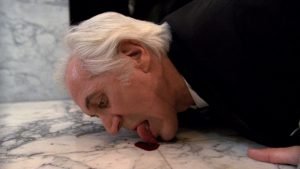 Cronos (Guillermo del Toro 1993) – This cool, early effort from the famed director about a mysterious device that promises the owner eternal life but at a horrible cost is slick and stylish and everything you’d expect!. Give it a spin.

Inside (Alexandre Bustillo, Julien Maury 2007) – A recently widowed pregnant woman is stalked by a crazed lady lunatic who really, really wants her unborn baby. What follows is much bloody mayhem! I loved this crazed piece of French nastiness! Pay no mind to the American remake. 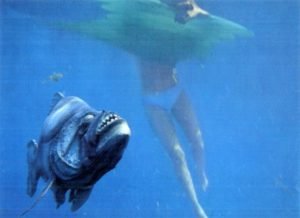 Piranha/Piranha (Joe Dante 1978/Alexandre Aja 2010) – A double bill of nasty flesh eating fishes are on the hook for today’s recommendation. Both are fun and silly with lots of carnage. Wade into the bloody waters for some good time fish action! 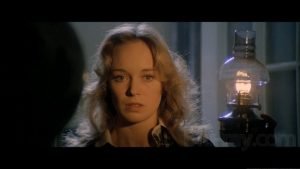 The Beyond (Lucio Fulci 1981) – Unsuspecting woman buys an old house in New Orleans that happens to be built over a portal to hell. I would think that the previous owners would have to disclose that in the sale information. Such a good, weird time this film is. And you’ll never want to own a cluster of tarantulas again! 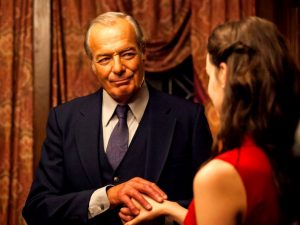 Starry Eyes (Kevin KÃ¶lsch, Dennis Widmyer 2014) – Young actress in Hollywood has some big dreams. But those dreams soon turn nightmarish as she discovers some unsavory secrets of the Hollywood elite and the what the cost of fame might be. Crazy, cynical and gory. Yes please. 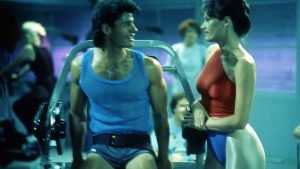 Death Spa (Michael Fischa 1989) – I thought we’d go with something completely silly, ridiculous and fun for today’s pick! Careful when you head on over to Michael’s Spa or you might get baked in a sauna, go blind, have your head explode or even lose an arm. Your call! 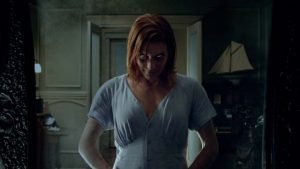 Oculus (Mike Flanagan 2013) – Early effort from Mike Flanagan (Dr. Sleep, Haunting of Hill House) about a haunted mirror! Sounds scary, right? Well, if you’re like me and find inanimate objects – photos, mirrors, killdozers – that become possessed by evil spirits terrifying, then this one’s for you!

The Love Witch (Anne Biller 2016) – Cool, retro witch tale that, while not particularity scary, is a sumptuous psychedelic freak-out for the eyes and other senses (if you know what I mean, nudge, nudge). Elaine the witch is looking for a mate and she has some potions to help her achieve her goal but the consequences are deadly! Very much fun! 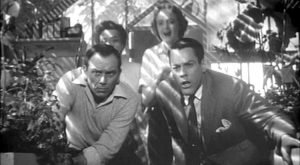 Invasion of the Body Snatchers (Don Seigel 1956/Philip Kaufman 1978) Double bill Monday! I love both of these versions of this creepy pod people story. Paranoia runs deep as seeds from outer space grow and replace humans with bland emotionless copies (aka Republicans) of themselves. Take your pick or watch both! 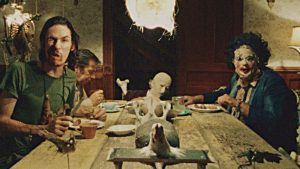 Texas Chainsaw Massacre (Tobe Hooper 1974) – I know the plan was to highlight some lesser known titles but I was chatting about this film last night and it got my juices flowing about how great and grim and disturbing this film is still 46 years later. Top notch. 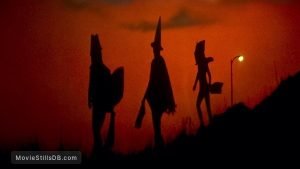 Halloween III: Season of the Witch (Tommy Lee Wallace 1982) – Three more days till Halloween. Halloween. Silver Shamrock! That stuck in your head now? This is a weird film. An evil guy wants to murder all the kids in the US by having a creepy mask melt onto their heads and that makes bugs and snakes come out of their skulls for some reason. Many plot holes and bad acting make this one a hoot. We have a watch-along track coming soon for this as well. 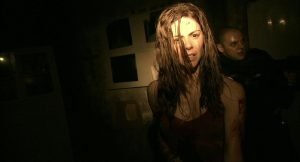 Rec (Jaume BalaguerÃ³, Paco Plaza 2007) – A reporter and cameraman tag along with some firefighters to a disturbance in an apartment building in Barcelona. What they find there is well, not what they expected. Great, terrifying found footage film was followed up by an very good sequel and a pretty OK 3rd installment. 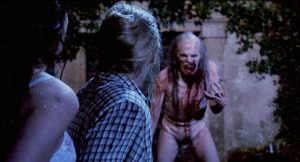 Suspiria (Dario Argento 1977) – Here was are, the last day of October, Halloween. I’m going to miss posting these and I have so many more to recommend. That said, let’s enjoy this wonderful, weird, colourful extravaganza that finds the mesmerizing Jessica Harper checking into a strange German ballet school. A classic. A masterpiece. (The remake was quite excellent as well!)

This entry was posted in Film Reviews / Recommendations. Bookmark the permalink.