The Black Dog T-shirts are here! They’re $15 (including tax) and are available in both locations in all sizes and two colours. They’re selling out quickly though, so come in and grab one soon if you don’t want to miss out. 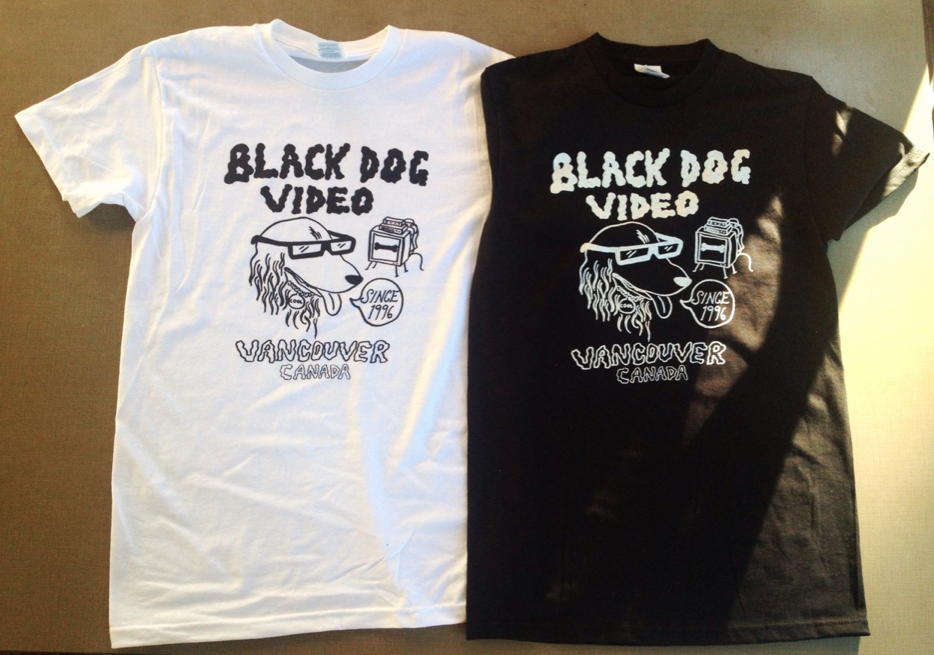 Mark your calendars! We will be celebrating International Independent Video Store Day at both locations! There will be a raffle with great prize baskets including goods and services from local businesses in the Cambie Village and Commercial Drive areas. We’ll also be CUTTING ALL LATE FEES IN HALF! That’s right! I can’t even believe it myself. All new release rentals will be 2 for $10 and all 7-day rentals will be 3 for $10.

and now for what you’ve all been waiting for… 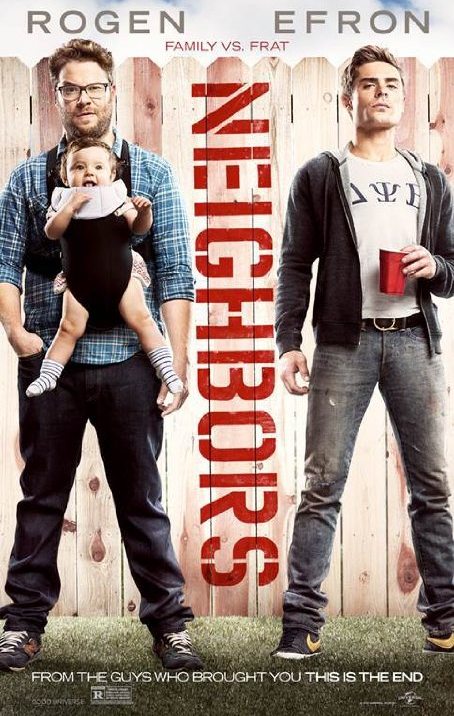 Neighbors – A pretty hilarious comedy about a frat house that moves in next door to a couple (Seth Rogen and Rose Byrne) who has just had the most adorable baby you can imagine. Lots of crazy shenanigans ensue as the parents and frat boys alternate being buds and enemies. If you’re a fan of Seth Rogen’s oeuvre this does not disappoint! 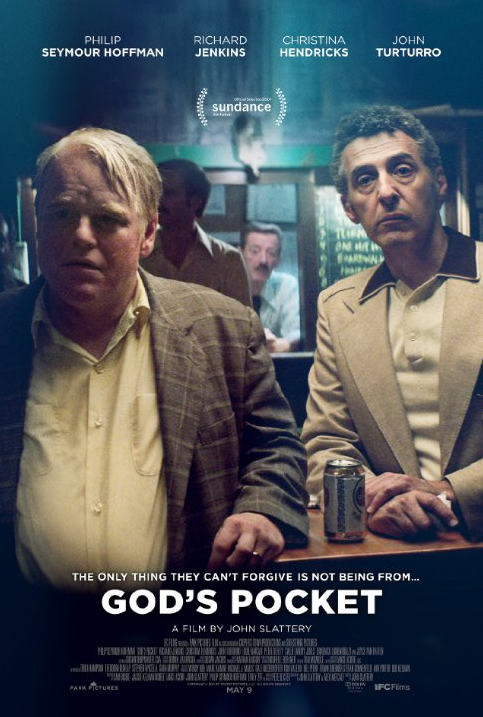 God’s Pocket – Mad Men’s John Slattery steps behind the camera to direct Christina Hendricks, John Turturro and Philip Seymour Hoffman (in one of his last performances) in this 1970’s working-class drama a la The Friends of Eddie Coyle. Who knew that God had pockets? I pictured him/her as more of a leisure suit type. 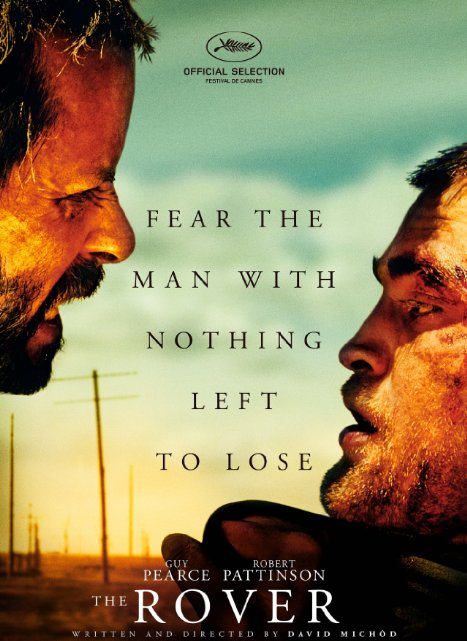 The Rover – From the director of the 2010 film Animal Kingdom comes this exciting new crime drama. In a post economic meltdown wasteland Guy Pearce has captured Mr. Sparkly Vampire himself, Robert Pattinson. Will the two eventually become friends as they trek across the scorched Australian outback to retrieve something special? You’ll have to watch it to find out! 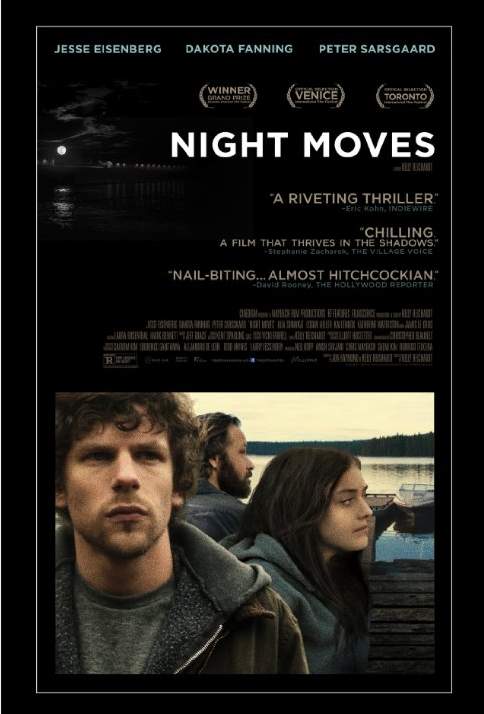 Night Moves – Kelly Reichardt’s newest film borrows the title but not the story from the great 1975 Gene Hackman film. This story instead focus on some radical environmentalists played by Jesse Eisenberg, Dakota Fanning and Peter Sarsgaard. These angry tree huggers have decided to blow up a hydroelectric dam. Oh geez. Great idea guys. 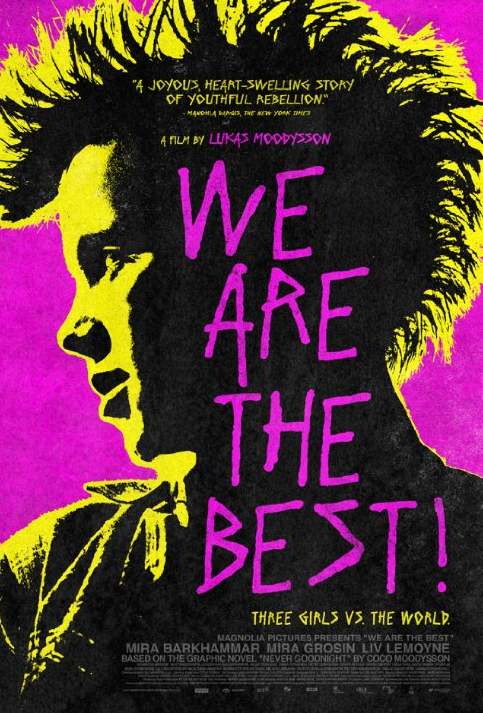 We Are the Best – Finally a new movie from excellent Swedish director Lukas Moodysson! This one focuses on three young girls who decide to start a punk band in 1980. If you haven’t checked out Moodysson’s other movies they are all highly recommended. 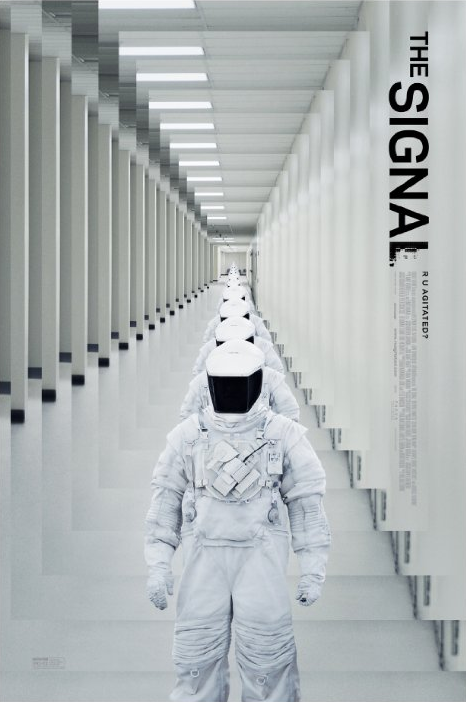 The Signal – A teenage road trip turns in to a close encounter of the weird kind in this mysterious sci-fi thriller. Laurence Fishburne stars in this strange one that will make you want to avoid hackers and area 51. 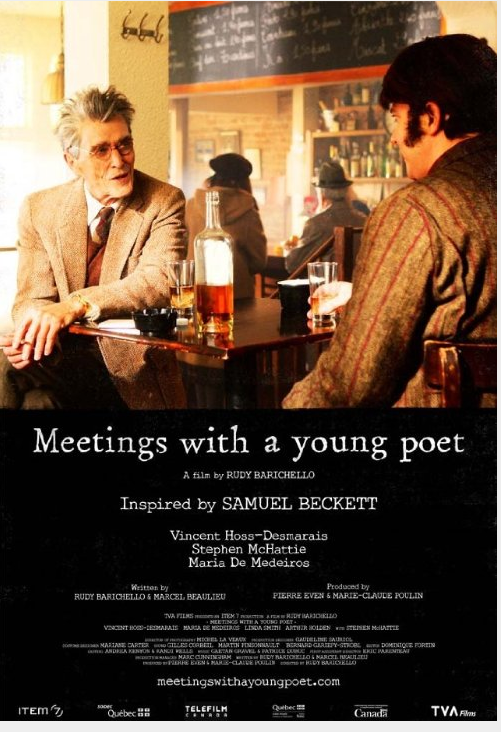 Meeting With a Young Poet – In this Canadian film, a young poet’s destiny is irrevocably altered when he meets his idol, the Nobel Prize author, Samuel Beckett, in a small country cafe. Stars Stephen McHattie and Maria de Madeiros. 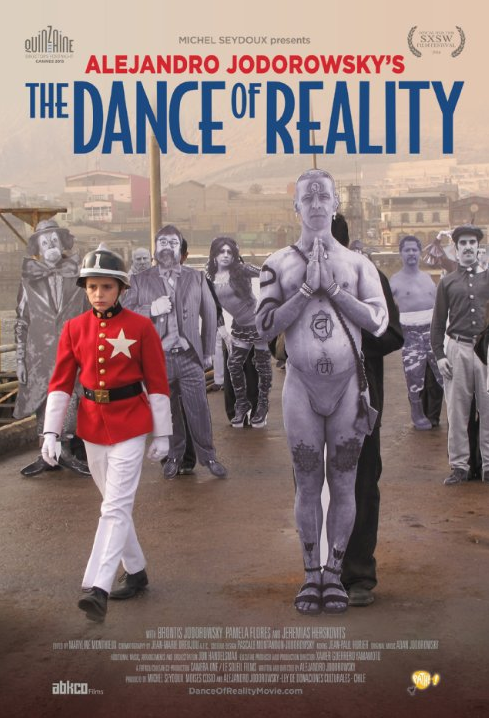 Dance of Reality – Jodorowsky is back with his first movie in 23 years. This one is less of a mystical acid trip and more like a trip down memory lane to his upbringing in Chile. A childhood like this really explains why Jodorowsky’s movies are so surreal and insane. 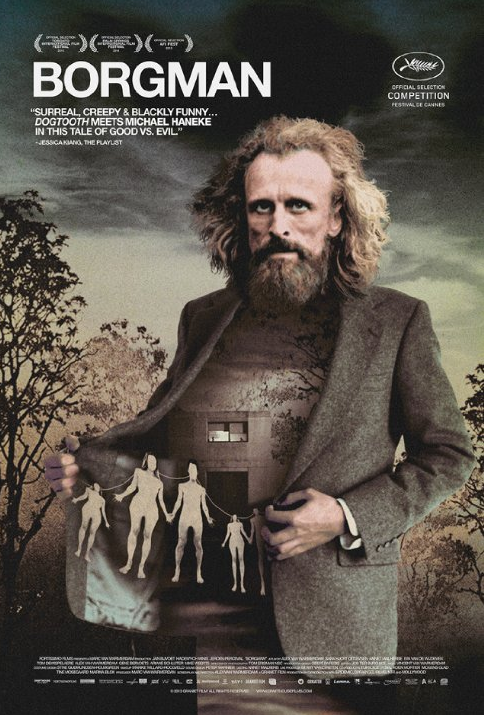 Borgman – This Dutch film is about a vagrant who enters the lives of an arrogant upper-class family, turning their lives into a psychological nightmare in the process. Sounds like a blast! 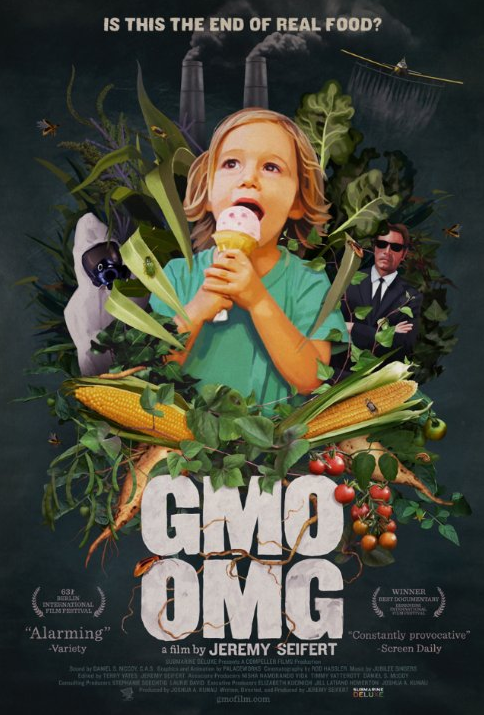 GMO OMG – Another food documentary that confirms that Monsanto is evil and everything we feed ourselves is poison unless we buy local and organic! Stop eating food! 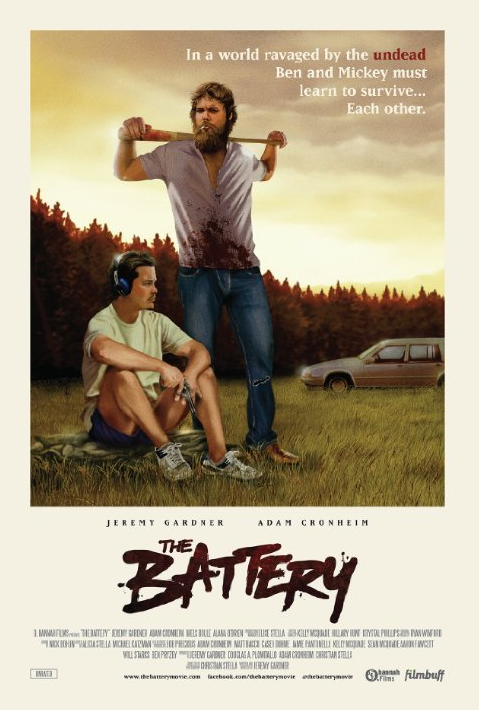 The Battery – Two former baseball players have to put up with one another as they traverse the rural back roads of a post-plague New England teeming with the undead. This is supposedly a nice fresh take on the zombie genre. 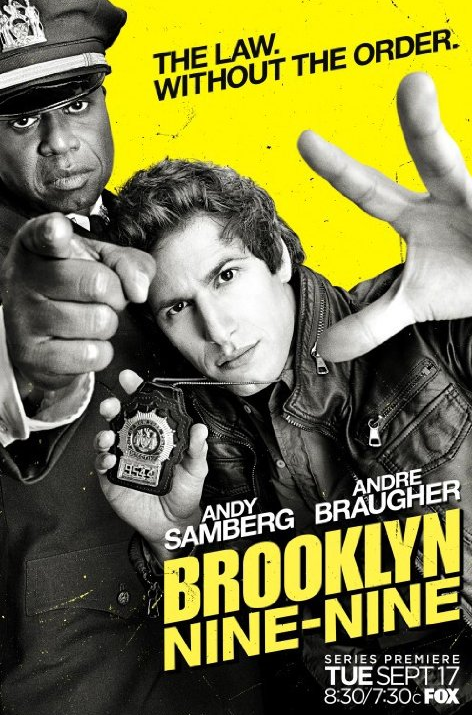 Brooklyn Nine-Nine – Season 1 – Andy Samberg stars alongside a handful of other goofy guys & gals in this police procedural comedy. I caught a couple episodes of this on a plane and it was actually pretty funny considering it’s on network TV 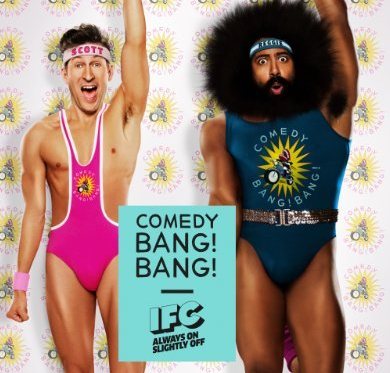 Comedy Bang! Bang! – Season 1 – If you like your comedies a bit weirder, then this is the show for you! The hilarious and talented Scott Aukerman and Reggie Watts adapted their podcast in to a “live” talk show. The first season features guests such as Jon Hamm, Amy Poehler, Zach Galifianakis, Michael Cera, Paul Rudd, Seth Rogen, and Weird Al Yankovic! Also lots of strange musical interludes from Reggie Watts, sketches and improvised bits with some very funny comedians.

That’s it for this week. Stay fabulous.

Another exciting week in the world of movie watching! 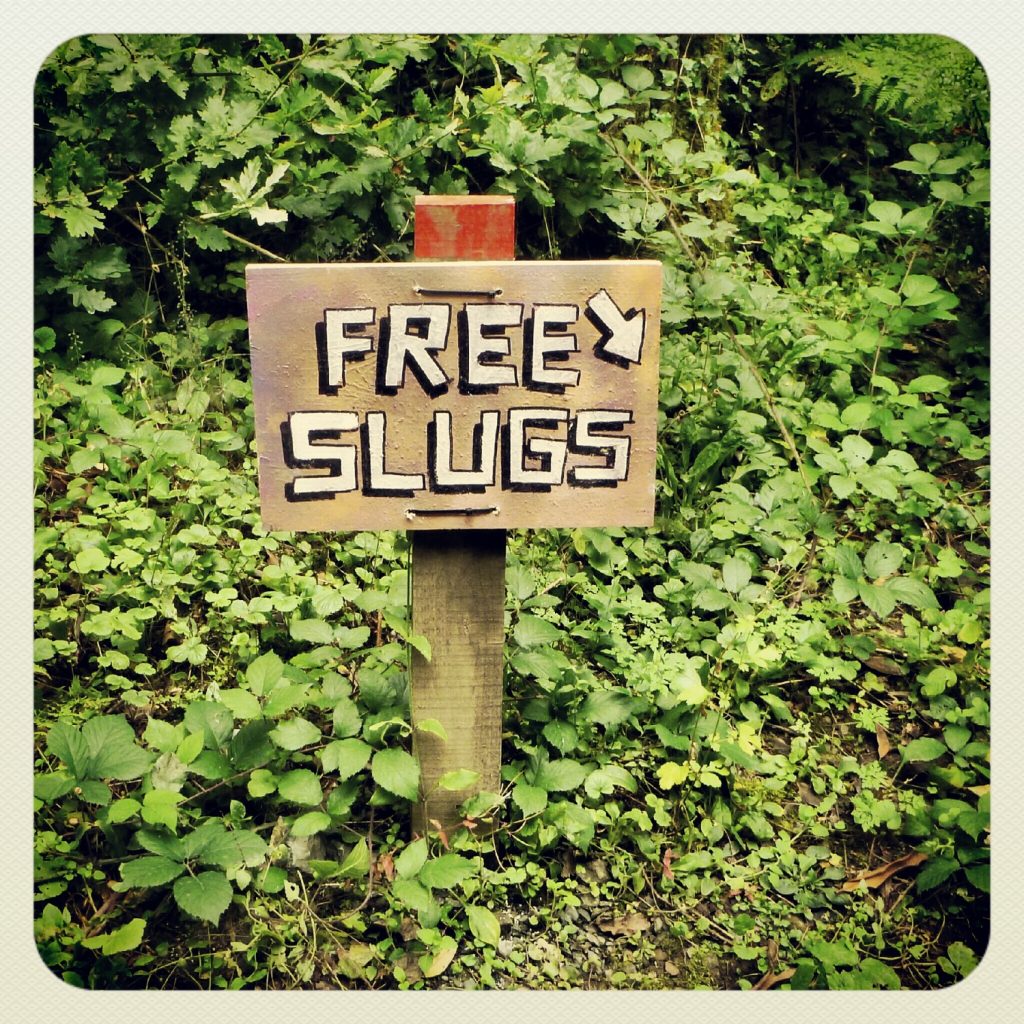 Sadly, it’s supposed to start raining again this week. Fear not! We’ve got a bunch of new movies and TV series just in that you can curl up with and hide inside until next spring.

Big News:
We just printed a big batch of brand new Black Dog T-shirts designed by yours truly. They are being delivered tonight so they should be in the Cambie store by Tuesday morning and hopefully at Commerical not long after. Photos to come soon on the Black Dog facebook page. (Hint: The shirt features a dog watching TV on it!)

And Now The New Releases: 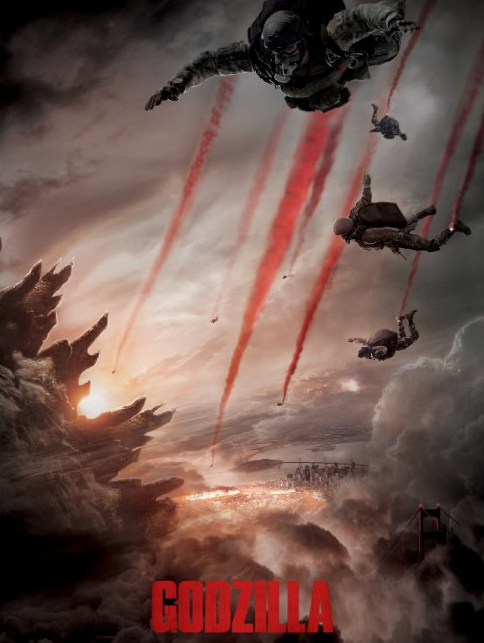 Godzilla – Everyone’s favourite grumpy dinosaur is awakened from hibernation to wreak havoc on San Francisco – unless Breaking Bad’s Bryan Cranston and Juliette Binoche can stop him. We even have it on 3D Blu Ray if you’re in to that kind of thing. 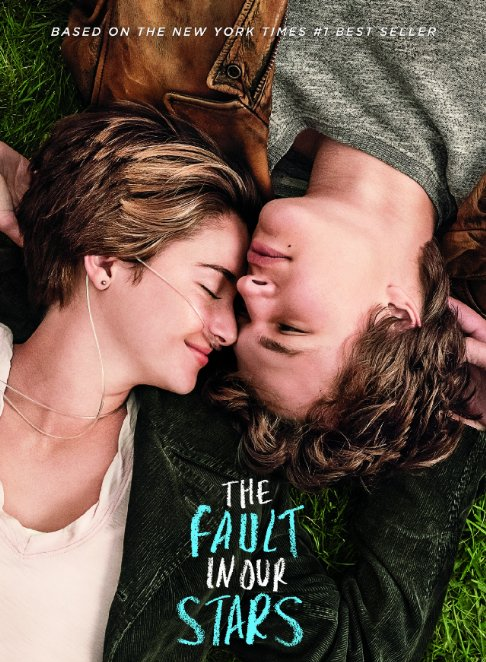 The Fault in Our Stars – Have your box of kleenex handy for this one. Based on the best selling book, this is a love story about two quirky teens who are both suffering from various types of cancer. That can’t end well, right? Cancer is the worst. Bonus: Willem Dafoe and Laura Dern have supporting roles. 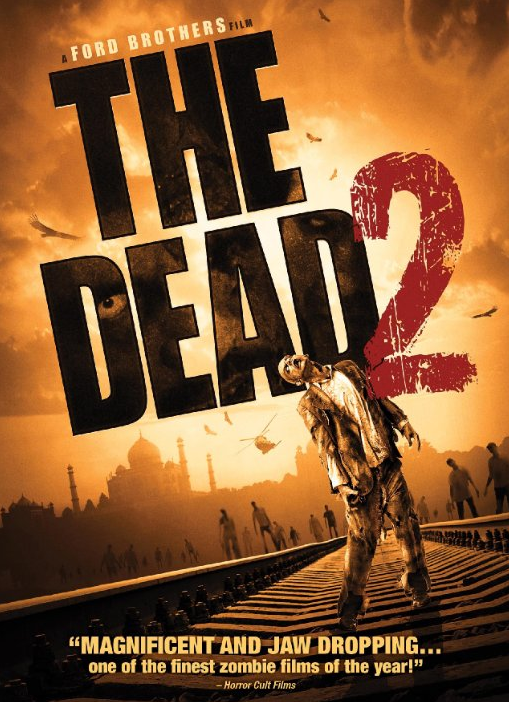 The Dead 2 – The Dead are back and deader than ever! People just can’t seem to get enough zombies. This time the undead fiends are in India, where the temperature probably doesn’t make the rotting flesh smell any better. Yikes. 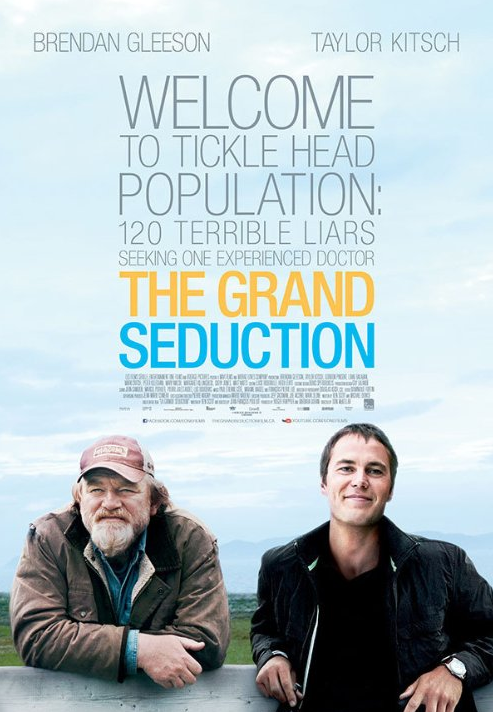 The Grand Seduction – Canadian sweetheart Don McKellar directs this remake of a French Canadian film of the same name. Residents of a small Canadian fishing town attempt to convince a young visiting doctor to move there permanently. This remake stars the always excellent Irish actor Brendan Gleeson. Worth watching probably just for the Newfoundland accents. 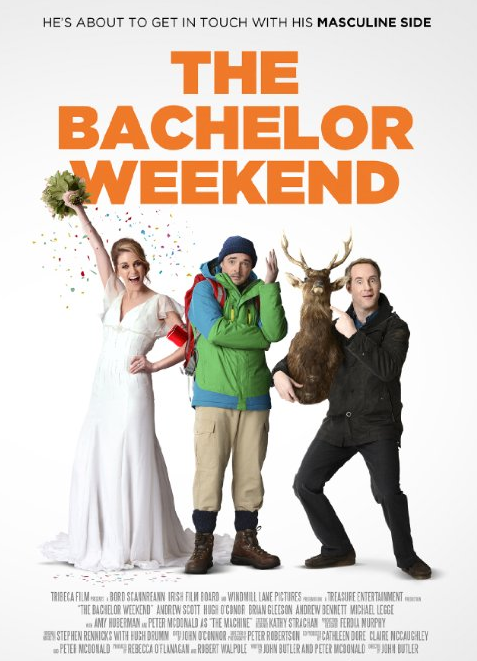 The Bachelor Weekend – Comedy centered around a group of Irish bachelors on a camping trip. Hijinks undoubtedly ensue. 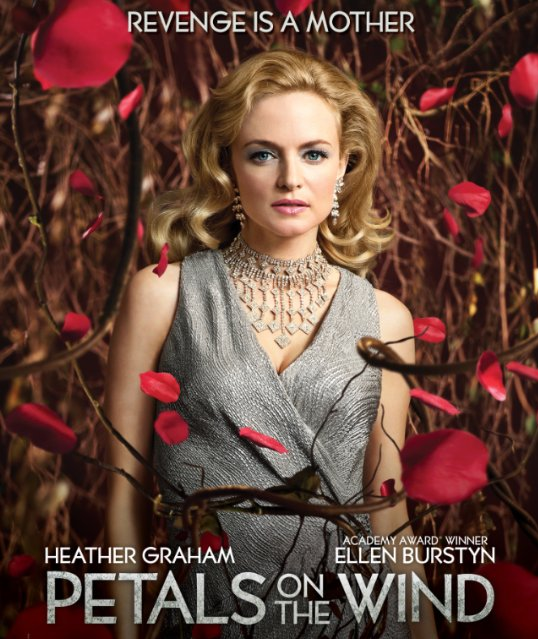 Petals on the Wind – Sequel to the recently released Flowers in the Attic. Based on V.C. Andrews’ controversial cult-classic novel. This one seems like Heather Graham has moved out of the attic and in to the limelight with some amazing 60’s outfits, hair and makeup. Also staring Ellen Burstyn as the mean old grandmother! 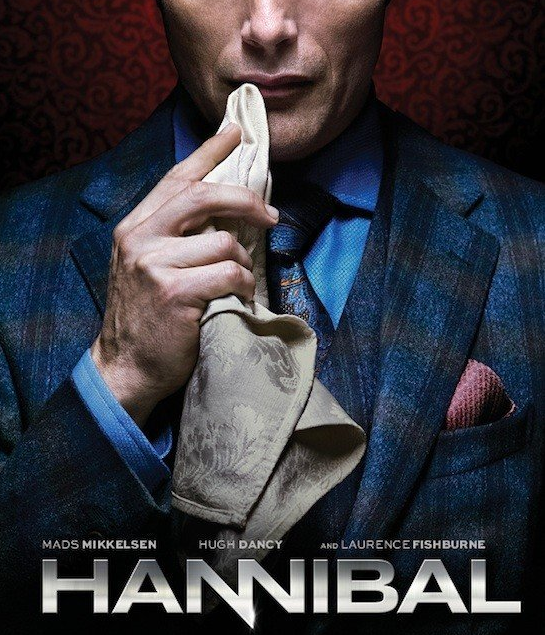 Hannibal Season 2 – Your favourite cannibal is back in this great origin story series. This show is packed full of great actors such as Mads Mikkelsen, Gillian Anderson and Scott Thompson. Plus it will make you want to sleep with the light on. 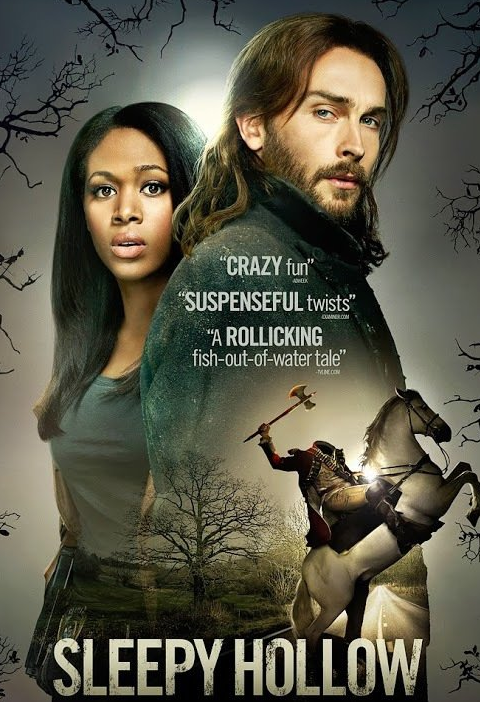 Sleepy Hollow Season 1 – If Hannibal isn’t enough scary TV for you we’ve also got this! Ichabod Crane is resurrected and pulled two and a half centuries through time to unravel a mystery that dates all the way back to the founding fathers. Well! Sounds interesting.

Have a fabulous week and don’t forget to pack your umbrella.

Well as we all can see by the number of sprogs still running around the parks, the streets, the back alleys and in front of the liquor stores, the kids are not back in school. Pretty ridiculous if you ask me. Maybe it’s time to recall our moronic Premier. Hell, she couldn’t even win her own riding. Anyways, to help out a bit everyday the kids aren’t in school, Black Dog is offering up all of our catalogue kids films for 2 for the price of 1! That’s in effect Monday to Friday as long as the children roam free.

New Stuff in Your Eyes 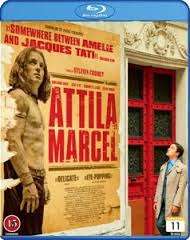 Attila Marcel – From the fine folks that brought you the amazing Triplets of B Belleville Not too sure what it’s about but I bet it’s kinda pretty swell and pretty French. DVD.

Captain America: Winter Soldier – Funny, this super-hero would seem to be the lamest of all what with his fancy shield and fancy pants and all, but these films are the best of all of them Marvel Avengers guys flicks. Don’t know what this one is about – I guess he fights a winter soldier! DVD, Blu Ray and 3-D Blu Ray..

ESPN: Catching Hell – Great ESPN doc about that guy who caught the ball at a Cubs game, preventing them from possibly making the playoffs. And if you know the Cubs, they never make the playoffs. Always wondered what happened to that guy. DVD.

The Double – Now it’s a movie with two Jesse Eisenbergs in it! Wow. First a films with 2 Jake Jellyhauls (Enemy – superb!), now this! Oh happy days. Dude has a guy show up at work who looks just like him, but more confident and fun! Crazy shit ensues. DVD and Blu Ray.

Fed Up – Doc about how sugar is making everyone fat and killing us off one slurpy at a time. DVD. 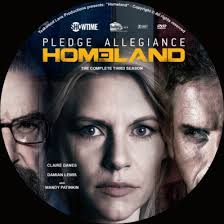 Homeland Season 3 – More espionage shenanigans. Is he a traitor? Is she going to cry hysterically again? Love this show! DVD.

Hornet’s Nest – Dad and his son, or son and his dad, journey into the war zone in Afghanistan to make this intense doc.

Palo Alto – Pretty good flick about a bunch of slacker kids hang out and smoke weed and get into trouble and stuff like that. Today’s youth, with all of their jingy-jangly music and weird clothes! Shakes fist at clouds. DVD.

Night Warning – Amazing film from the 80’s about an orphaned kid who’s taken in by his crazy aunt. Weirdness ensues…

That’s it for this week, folks. I’ll be taking an extended break from the newsletter to do a spot of travelling. The lovely and talented Jessica will be taking over the reigns.
Be safe, rent well and we’ll talk soon.
Copyright © 2014 Black Dog Video, All rights reserved.
You are receiving this email because you signed up in-store or online.

Well it’s all over. It’s been great, it’s been hot. There was sweat, tears and maybe even a little blood. And the summer was fine as well. Thanks so much to everyone who participated in our “In Dog We Trust” Indiegogo campaign. We raised a nice chunk of change, folks were very generous and responsive, and we had lots people come back into the stores to rent and had many more new sign ups. Gives us hope and rays of sunshine for the future. Only time will tell. We’re putting a few things together to help compliment what we already do. Stay tuned for details.

You made us this happy! 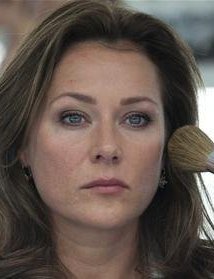 Brony Tale – Doc about those borderline creepy guys who spaz out over My Little Pony. The film also follows local actor Ashleigh Ball who is the voice of one or more of the animated equines. DVD

Cabin Fever: Patient Zero – More gross out flesh-eating virus shenanigans. We all know how much you like your flesh-eating movies, be it virus, or zombies or Oprah. The first one was OK but it is responsible for unleashing Eli Roth on the world. For better or for worse. I don’t think he has much, if anything, to do with this installment. Stars Sam Gamgee for those of you who were disappointed he didn’t get his flesh eaten in Lord of the Rings. DVD 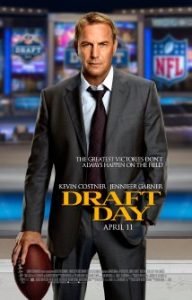 For No Good Reason – Cool looking doc about Ralph Steadman, that dude who did all the neat art for Fear and Loathing and other Hunter S. Thompson works. DVD.

They Came Together – Hilarious comedy starring Paul Rudd, Amy Poehler and Bill Hader about love/hate at first sight, candy and other stuff guaranteed to make you laugh. (Guarantee void in the greater Vancouver area).

Check out these Recommendations for Inspiration

Talk at you next week!